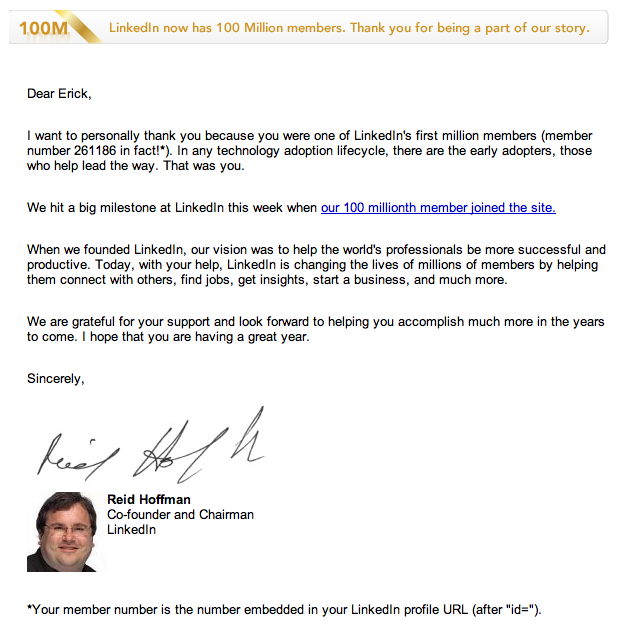 As you may have heard, professional social network LinkedIn passed 100 million members this past week. Amid an upcoming IPO, this was a pretty significant milestone for the social network. And today, LinkedIn co-founder and chairman Reid Hoffman has sent the first million members an email, personally thanking them for joining the network in its early days.

TechCrunch editor Erick Schonfeld received a note (he is member #261,186), which we’ve embedded in the post. The note reads: I want to personally thank you because you were one of LinkedIn’s first million members (member number [ ] in fact!*). In any technology adoption lifecycle, there are the early adopters, those who help lead the way. That was you.

For the few users who were one of the first 100,000 members, LinkedIn sent a similar note thanking them for being “innovators” (Federated Media founder John Battelle was member #74,282).

LinkedIn, which launched in 2003, says that it is now being used in over 200 countries, with more than half of its users originating from outside the U.S. To be exact, the U.S. has 44 million LinkedIn members, and there are 56 million members outside of the U.S.

While the note itself isn’t monumental news, a somewhat personalized congratulatory note from the founder and chairman of LinkedIn is a nice touch for the network’s users. UPDATE: Reid Hoffman (@quixotic) is now trending on Twitter in the U.S.