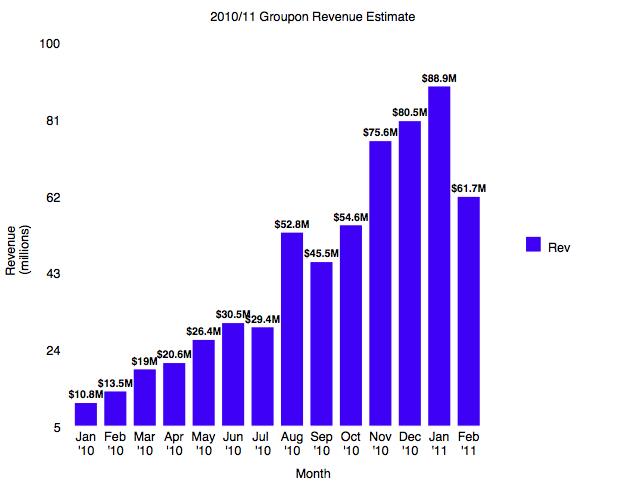 By most accounts, Groupon is growing like gangbusters. It’s taking market share around the world, hiring left and right, and priming for a $25 billion IPO. But how much of the group-buying site’s revenues are U.S. versus international and how is it doing in its home market, especially after its disastrous Super Bowl ads?

The chart above shows a pretty good estimate of Groupon’s monthly U.S. revenues based on an analysis of every Groupon deal on its site over the last year (each deal page shows how many Groupons were sold and the price). Some key takeaways: From January, 2010 to January 2011, Groupon’s U.S. monthly revenues grew eightfold from $11 million to $89 million. But February saw a huge 30 percent drop-off to $62 million. Was that a backlash because of the Super Bowl ads or simply a breather after three months of crazy holiday deals?

When you add up all of the monthly figures for 2010, it comes to an estimate of $460 million for Groupon’s annual U.S. revenue. That is 60 percent of Groupon’s rumored worldwide 2010 revenue of $760 million reported by the WSJ. And it also gels with this report on the U.S. group buying industry, which estimated total 2010 U.S. group buying revenues at $1.1 billion, with Groupon accounting for less than half. But the numbers being thrown out for Groupon’s 2011 revenues are in the $3 billion to $4 billion range. That means that either these estimates are low (a possibility), or that the bulk of Groupon’s growth is overseas.

This data came from a source I trust who monitors Groupon’s offers and has written custom software to gather the data. My source is not the only one doing this kind of digital sleuthing. Late last year, I received a similar data dump from another source that I never published because I wasn’t sure I could trust that source. Looking back now and comparing the two data sets, they are almost identical month by month. Again, these are just estimates based on the equivalent of scraping Groupon’s site, and thus could be missing something. Or something could have changed in February to make the data collection methods used less reliable.

But let’s look at one more set of data, this time from comScore. Its estimate of Groupon’s U.S. traffic shows it peaking in December. 2010 at 10.7 million unique visitors, and then drooping to 9.7 million in February, 2011. It stands to reason that traffic to a deals site is strongly correlated to revenues.

I reached out to Groupon CEO Andrew Mason about this data. He doesn’t talk about revenues, per his policy, but on the traffic numbers from comScore he says emphatically, “my man, don’t you know that shit is bullshit?” He sent me the Google Analytics chart at the bottom of this post, which he says shows Groupon’s true U.S. traffic trend. I guess we’ll find out how accurate this data is when Groupon files for its IPO, assuming it breaks out U.S. revenues in that filing. 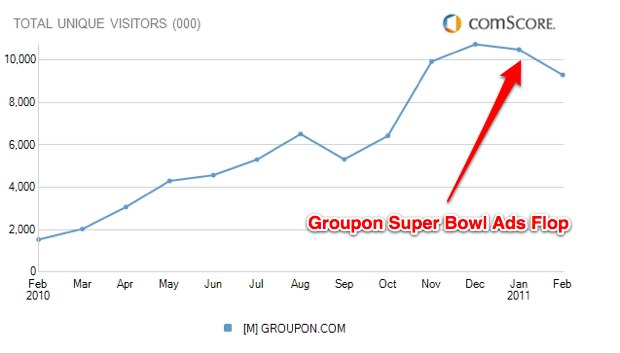