Editor’s Note: This is a guest post by Mark Suster (@msuster), a 2x entrepreneur, now VC at GRP Partners. Read more about Suster at Bothsidesofthetable

Startups. We know the mantra: Team matters. Is this philosophy exaggerated? Overrated? Cliché? No. Team is the only thing that matters.

Whatever you’re working on now, the half-life of innovation is so rapid now that your product will soon be out-of-date. Your existence is irrelevant unless you continue rapid innovation.

Your ability to keep up is dependent on having a great team of differing skills. Individuals don’t build great companies, teams do.

The nature of the Internet and global knowledge is such that even if you’ve stumbled on to a super interesting area of innovation there will be many teams tackling the same problem at exactly the same time.  If you develop something novel that catches a spark you’ll have the world gunning for you over night. In this globally connected world product leads disappear in nano-seconds.

The company with the best team on the field will win. The team which hires the most talented people, channels them in the most productive configuration and gets the most output from their unique capabilities.

So how exactly do you assemble such a team?

Is this a universal truism? Of course not. But it is general pattern matching. And it’s why VCs tend to look for uber-talented founding teams. We know that if you start with ho-hum founders you’d less likely to assemble a world-class team.

So if you’re trying to scale your team be focused on quality. Don’t sacrifice. Don’t hire too quickly just because you raised money or because you feel pressure to make things happen. The minute you compromise on quality you’ve already begun the descent.

It means that many management teams I know feel the need to hire people who have “done it before” and frankly many VCs encourage this. It’s a mistake. When you hire somebody too early who has already “done it” you often find somebody that is less motivated in tough times, less willing to be scrappy (as many startups need to be), more “needy” and less mentally flexible / willing to change their way of thinking.

Importantly, you also find people who are too quick to undermine the authority of the founders. They “know more.” You don’t want sycophants – don’t get me wrong – you want people who challenge your thinking and a meritocracy of ideas. But you don’t want team members who openly question your judgment, your authority. At least not publicly.

So what do it mean to “punch above one’s weight class?” It’s a boxing analogy. It means a welter weight who wants to fight in the heavy-weight category. It means a “young Turk” who has something to prove. It means somebody who held the director of sales in their last company but in this company wants to be VP. Their last company said, “you don’t have enough years of experience.”

You said, “Eff experience. I want to know whether you can deliver. If you can, you’re golden. You’ll go a long way. If you can’t – you’re toast. Are you up for it?” It’s Tristan Walker of FourSquare. They hired him when he was an MBA. He had no right asking for a senior biz dev role at one of the hottest companies in the US. But he was ready to punch above his weight class. And he pushed for it.

And heavy-weight he has become. He is out innovating people with 10 years’ his experience. He is hungry. He is an A player. His innovation and execution are proving his worth.

3. ABR: Always be recruiting
In the entire time I was an entrepreneur I think I never really stopped recruiting.

In my busiest days I was still taking early-morning coffees or end-of-day beers to meet as many people as I could. Sunday mornings often became recruiting coffee sessions.

One of the “tells” for me of a management team that will not be extra-ordinarily successful is that they’re not always recruiting. I’ve seen it before – I send a talented member to a team and they say to me, “we don’t really have a role for that person.”

I might choose to do an upgrade on my existing team. I might be grooming them for when I have more money or more revenue. I might not be able to persuade them now but I want them to know my company so that when I’m ready to step on the game I have a list of A players I want.

Sure, the challenges to me are obvious:
• How can I afford them?
• How do I motivate them?
• If I bring them on board now, how do I not reduce the motivation from those that I have already hired?
• Should I upgrade existing staff or hire them laterally?
• Can I persuade them to join when they have other choices?

If you’re not dedicating a large chunk of time to continually “recruiting” then you’re high. Or maybe you’re “low” – as in “not likely to succeed.”

4. Don’t worry about exact “roles”
I think the most limiting factor that stops startups from recruiting is the “we don’t have an open spec” or “we already have somebody doing that role” excuse. Don’t let that be you. Your team can always make room for David Beckham. Lebron James. Keith Rabois. Sheryl Sandberg.

Get out there and find them. Ask others for intros to their talented friends. Meet talented people and sell them the vision. Get them exited about what you’re doing. Be relentless.

If they’re amazing, then be radical. Give them controls that they don’t have in their current company. Allocate them enough options to salivate. Convince them that even if they stay only a year they’d learn great stuff that would be valid for the rest of their future. You might several meetings to bag top prospects. But if you never start you’ll certainly never hire them. 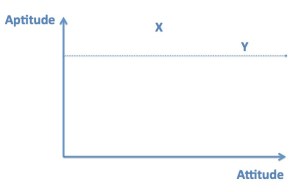 If you’re doing a great job at continually recruiting and if you have a company ready to hire several people, at some point when you have enough of a pipeline of talented people you need a way to separate them. I have a long-standing mantra, “attitude over aptitude.” This is assuming a raw minimum of MIPS in the candidate. They need to be seriously smart / talented in their field to make the minimum grade.

But within this “minimum acceptable talent level” you still have a wide variance of “employee types.” Let’s be honest – some uber talented people are PITAs. I never hire them. One bad apple spoils things for everybody.

You don’t see it coming. You figure, “sure, they’re a pain but they produce such high quality work I’m willing to put up with them.” Don’t. The last thing you need is some rat bastard fomenting trouble.

They’re the ones who are talking pop at cocktail parties when they’ve had one too many. They’re having private lunches with other employees talking about how they’ve lost faith in your vision.

When you hit internal moments of doubt you need the team members who say, “Guys, we can do this! We’re up against the ropes but we’re not down. Let’s dig in.” You need team members who do that when you’re NOT there.

If you have a trade-off between somebody who is more talented but a “bad seed” versus somebody who is very talented (but perhaps less so) who is a motivator – I’d hire the latter any day of the week.

6. Culture matters
Along the same lines as aptitude I would say that “company culture” matters. Know what your principles are. Know the kind of people you want. Know what makes a member of your team. What traits are important to you? What values to you want to embody?

Try to set out guidelines for hiring. Try to live them yourself or people will see through it.  As times get tough you’ll value this culture. Even in uber successful times where you’re hiring like mad you’ll want to know what somebody who embodies your culture is like.

The best book I ever read on this topic was Delivering Happiness by Tony Hsieh (founder of Zappos). It’s a must read and has great advice on building a company culture.

7. Don’t over-sell
Finally, I always tell management teams not to “over sell” and I never do so myself.

I don’t mean you shouldn’t sell hard on the virtues of your company and why you’re the next Google – you should. If for nothing else you want all of the talented people you interview to spread the gospel whether they join or not.

What I’m talking about is this – if somebody is thinking about joining but you can tell they’re not convinced don’t cross the line to get them to join. What does this mean?

Sell hard, sure. But don’t over sell.

Why? Because if somebody is not convinced in their own mind and you arm-twist them to join they’re bound to be unhappy and eventually leave. I’ve seen it a loads of times. You promise the world. You don’t deliver. They are frustrated. They feel duped. They express this to others. Now you have more than one problem.

And it’s never a good thing when a high-profile hire quits unexpectedly. It causes otherwise happy people to second-guess things.

So sell, by all means. But don’t over sell. Don’t promise unrealistic things. Don’t over promise.

So go and schedule your next coffee meetings. Increase your number of interviews. ABR.