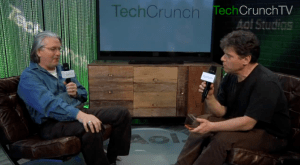 Appropriately, Bruce Sterling closed SXSW this year. It’s appropriate because after Bruce, there really isn’t much to say. He’s just about the smartest and funniest historical science fictional writer in the business. And the edgiest too – even though he’s built a professorial façade to disguise the punk in him.

So it was a huge honor to catch the darkly euphoric Bruce in Austin where he talked to me about his upcoming new book Gothic High Tech and Favella Chic, on why “hactivism” isn’t democracy and why he finds Sarah Palin “super interesting.”

And stay tuned for tomorrow when Bruce tells us what comes after the future.