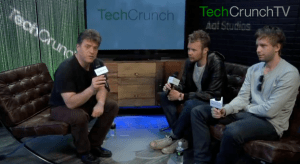 One of the most eagerly awaited movies debuting at SXSW this year is the Swedish production Press, Pause, Play. It’s an examination of both the benefits and the downside of the democratizing power of the Internet, featuring interviews with Seth Godin, Scott Belsky, Sean Parker, Moby and (blush) myself.

Press, Pause, Play got its world premiere on Friday night in Austin and yesterday I had the opportunity to sit down in the AOL studio with its two Swedish co-directors, David Dworsky and Victor Köhler. Both guys seemed liked they hadn’t had any sleep for about six months; both, I suspect, had been enjoying the delights of SXSW rather too much.