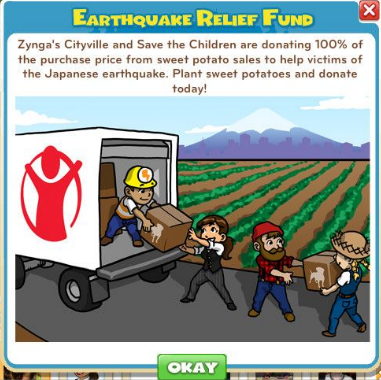 Social gaming giant Zynga has joined the Internet’s efforts at donating to Japanese Tsunami relief tonight, by enabling in-game donations through virtual good buying in Zynga games like FrontierVille, FarmVille and CityVille as of 7pm PST. 100% of the virtual goods purchase prices will be donated to Tsunami relief.

Zynga will be specifically partnering with Save the Children to raise money for its Japan Earthquake Tsunami Children Emergency Fund. Altruistic players can contribute by buying designated virtual goods like a sweet potato crop in CityVille, a Kobe cow in FrontierVille, radishes in FarmVille and a royal flush for Zynga Poker.

Zynga representative Dani Dudeck informs me that the campaign was created in under 24 hours and is the largest charitable campaign in company history. It is also the first CityVille Zynga.org campaign.

Players who want to donate in the non-Ville game Words With Friends can use the Save the Children button inside the game. Players in all games within Facebook can also send funds using the Zbar, or the bar that sits on top of the game. Facebook will also be donating its traditional 30% cut on the Facebook Credits used to contribute to the relief.

Judging by a rare tweet by Zynga CEO Mark Pincus, Zynga ambitiously wants to raise 2 million through the efforts. Those interested but not currently playing can also donate outside of the games here.