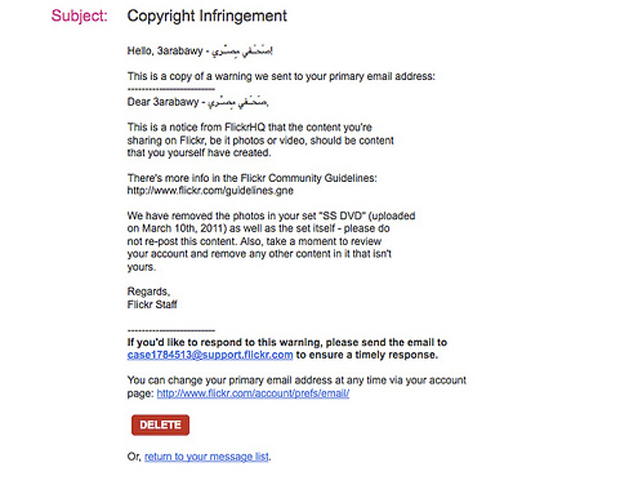 Last weekend Egyptian protestors broke into Amn al Dowla, the Cairo headquarters for the Egyptian security agency, and removed a “treasure trove” of video disks, hard disks and CDs with government documents from the Mubarak era.

Egyptian blogger Hossam Arabawy came into possession of a CD from the raid and has been uploading a set of Secret Service officer pics to Flickr for the past week. Arabawy posted on his on blog that Flickr removed the photos yesterday, citing copyright infringement. Arabawy’s post led to NPR’s Andy Carvin asking Flickr for a response to the accusations of censorship.

Flickr responded both to Carvin and to me, citing user complaints as impetus for the takedowns:

“The images in question were removed because they were not that member’s work. As stated by the Community Guidelines, ‘Flickr accounts are intended for members to share original photos and video that they themselves have created.’

Flickr isn’t a place for members to just host images but a place where members share original photos and video; and the Flickr community is built around that. For this reason, when we discover images that violate this provision, we may remove such images from the account and, in some instances, delete the account altogether.

While we regret that this action has upset the user, he must understand that this is not a decision we ever take lightly but only as necessary to ensure that Flickr remains a great place to creatively post and share original photos and videos with friends, family and the world.”

Indeed, the photos in question were not taken by Arabawy. We could go on all night like this but the main point is Flickr has (a valid) excuse.

Update: Prominent member of the Flickr community Thomas Hawke writes that disingenuously chalking it up to Guidelines issues is a “giant cop out” on Flickr’s part as, “Flickr knows that Flickr is *full* of photos that are “not a member’s work.” Read his take here.