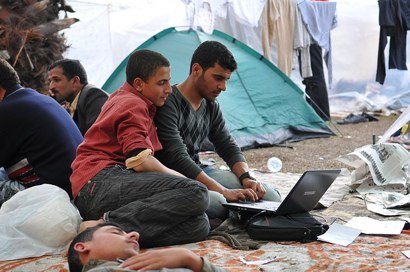 Editor’s note: Guest author Shervin Pishevar is the founder of the OpenMesh Project, SGN and an active angel investor.

On January 7, 2010 I was ushered into a small private dinner with Secretary Hillary Clinton at the State Department along with the inventor of Twitter, Jack Dorsey, Eric Schmidt, CEO of Google and a few others. We were there to talk about technology and 21st Century Diplomacy. As we mingled I noticed next to me the small table that Thomas Jefferson wrote the first drafts of the Declaration of Independence. I was inspired by the history around us as we discussed the unfolding history before us. I was sitting in front of Secretary Clinton and when she asked me a question I said, “Secretary Clinton, the last bastion of dictatorship is the router.” That night seeded some of the ideas that were core to Secretary Clinton’s important Internet Freedoms Speech on January 21, 2010.

Fast forward almost exactly one year later to January 25, 2011—a day that shall live in history in the company of dates like July 4, 1776. Egypt’s decision to block the entire Internet and mobile telecommunications network was one of the first salvos in a war of electronic munitions. In this new frontier humans are the routers and armed with new technologies they can never be blocked or silenced again.

I was staying up for days sharing and tweeting information as they happened. I had two close personal friends of mine in Egypt who were passing me information when they could. The day Egypt blocked the internet and mobile networks my mind went back to what I had said to Secretary Clinton. The only line of defense against government filtering and blocking their citizens from freely communicating and coordinating via communication networks was to create a new line of communications technologies that governments would find hard to block: Ad hoc wireless mesh networks. I called the idea OpenMesh and tweeted it.

Within hours through crowdsourced volunteer efforts the OpenMesh Project was alive complete with domain name, website and forum. One volunteer, Gary Jay Brooks, a tech entrepreneur from Michigan, stepped up to lead the effort as a volunteer Executive Director. Another company from Canada volunteered to donate their specs for a tiny mobile router, that could be hidden in a pocket, and would cost only $90 per unit for us to make. Another well known communications pioneer stepped up to donate some important patents in this space.

OpenMesh’s basic idea is that we could use some new techniques to create a secondary wireless Internet in countries like Libya, Syria, Iran, North Korea and other repressive regimes to allow citizens to communicate freely. By create mobile routers that connect together we could create a wireless network that mobile phones and personal computers can connect to. The first priority would be to have the people connect together and the second priority is for them to connect to the world. One the second front, we could use intermittent satellite internet connections so people in those nations could upload and download information with the rest of the world. Openmesh aims to be a clearinghouse for the best ideas out there to connect and get products out into the hands of people.

Open Mesh networking is a type of networking wherein each connected node in the network may act as an independent router or “smart” device, regardless of whether it has an Internet connection or not. Mesh networks are incredibly robust, with continuous connections that can reconfigure around broken or blocked paths by “hopping” from node to node until the destination is reached, such as another device on the network or connecting to an Internet back haul. When there is local Internet available, they can amplify the number of people who can connect to it. When there isn’t, mesh networks can allow people to communicate with each other in the event that other forms of electronic communication are broken down. Devices consist of most wifi enabled computers and run on existing Microsoft Windows, Apple OS X, and Linux systems along with iPhone and Android mobile devices. An open source mesh network further offers a scalable solution that retains low costs while avoiding path dependencies and vendor lock-in. Combined with open hardware, these networks facilitate long-term maintenance flexibility and improvements.

We will be establishing, building, maintaining, and distributing a common Open Source Mesh software/firmware that will allow citizens of the world to commonly communicate without telephone or cable companies. The raw product OpenMeshProject.org will free to download and free of charge. The technology will be released and maintained as Open Source GPL V2 project. This means that anyone can use or change the software. Our job as a community will be to maintain this project. We will help to build standards. We will help communities build mesh networks. We will lobby equipment manufactures to join the Open Mesh Project initiative. The idea all revolves around wireless technology that will allow us to connect and communicate with each other without telephone lines, cable, or fiber. We will build private networks that can span countries. We will empower the citizens of tomorrow. At the end of the day a grandmother might find this disk on the street, walk into the house, install a CD on her laptop and join the mesh cloud with 2 clicks. After joining the mesh she starts to see others in her network, clicks to call others in the mesh, joins group calls, or searches for friends online to dial. We as the OpenMeshProject.org community will facilitate the building, offering, and support for this project. We will all build 1 common mesh. We invite people to participate and to offer new innovations. Working together we can secure tomorrows communications needs.

Free communications is an essential human right. The 21st Century will be defined by the idea that no Government, no power shall ever block or filter the right of all men and women to communicate together again. It is my dream that within my lifetime that dictatorship shall be banished from this planet and unfiltered and true democracy shall flourish everywhere. It is time that our Faustian bargains with brutal dictators for short-term concerns end and a new covenant directly made with citizens everywhere seeking freedom will take its place. OpenMesh is a first step to help create a world where such a covenant can take hold in a world where brave people armed with new electronic tools can never be blocked or silenced ever again.