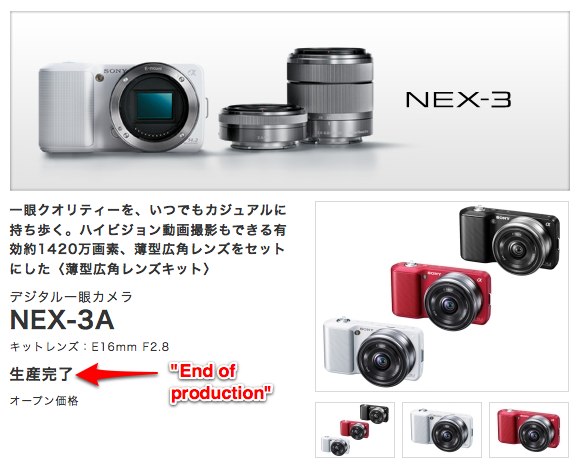 Where did this come from? Sony Japan updated the websites of the NEX-3A, NEX-3K and NEX-3D earlier today, stating that all three models of the camera won’t be produced anymore (the “buy now online” buttons were also removed from the product descriptions).

If this isn’t a mistake, this would be a quite surprising move as the NEX-3 was released just a few months ago and was last updated in October with a new color. The NEX-5 site was left unchanged.

There is no press release on Sony Japan’s official website yet, but in the company’s Japanese online store, Sony says the 3D model isn’t available anymore (this could have been the case earlier than today though). The other two models are still available.

Sony Global and Sony Europe haven’t released any information yet either, and all three NEX-3 models are still listed as available in the US store.