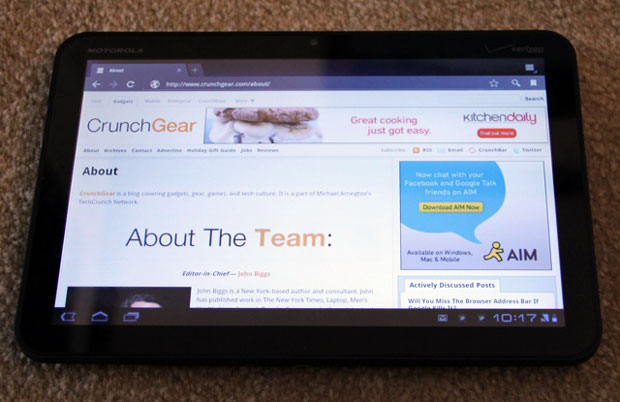 If the Xoom’s $800 price was a little daunting, VZW’s $600 on-contract price might sound a little easier on the wallet. That price gets you the full 3G (upgradeable to 4G) Xoom as long as you don’t mind spending $20 a month for 1GB of data. This works out to an end cost $1,080 for the device and 24GB of wireless data. The silver lining is that Verizon also announced that the Xoom’s LTE upgrade will be free, which might make the commitment a tad easier to justify. Of course since the presser clearly specifies the 3G data plan is $20 a month, the 4G plans might carry a premium.

It’s not exactly a phenomenal deal and considering the Xoom will only be the hottest Android tablet for so long. I’m always hesitant on buying a first-gen device like this. The second incarnations are always worth the wait. This is especially true when talking about Android devices, which also seem to have a short shelf life. Buy now or wait until the Xoom 2. Or Xoom HD2. Or if the good lord turns his back on humanity, the Xoom 3D. Press release after the jump.

Motorola XOOM Tablet to Be Available on the Verizon Wireless Network on Feb. 24

BASKING RIDGE, N.J. and LIBERTYVILLE, Ill., Feb. 22, 2011 /PRNewswire/ — Verizon Wireless and Motorola Mobility, Inc. (NYSE: MMI), today announced the Feb. 24, 2011 availability of the innovative new Motorola XOOM™ tablet, which won the coveted CNET Best of Show award at the 2011 Consumer Electronics Show for being “the most potentially disruptive technology.” The first device to run Google’s new Android 3.0 Honeycomb operating system, the Motorola XOOM will be available for purchase from Verizon Wireless for $599.99 with a new two-year customer agreement or $799.99 without a contract. Wireless 3G data service for the Motorola XOOM will begin at $20 monthly access for 1GB. The Motorola XOOM will be upgradeable to 4G LTE service at no additional charge in the second quarter of 2011.

A powerhouse in both software and hardware, the Motorola XOOM is built around a 1GHz dual-core processor and 10.1-inch widescreen HD display. The sleek, stylish design features a front-facing 2-megapixel camera for video chats, as well as a rear-facing 5-megapixel camera that captures video in 720p HD.

The Motorola XOOM showcases the innovations of the Honeycomb user experience that improves on Android favorites such as widgets, multi-tasking, browsing, notifications and customization, as well as featuring the latest Google™ Mobile services. The Motorola XOOM also features full support for tabbed browsing and support for the Adobe® Flash® Player, available soon as a free download, to enjoy all the video and other rich content available on the Web. For additional information about upgrading their XOOM to 4G LTE, customers can visit www.verizonwireless.com/Xoom4GLTEUpgrade starting Thursday, Feb. 24.