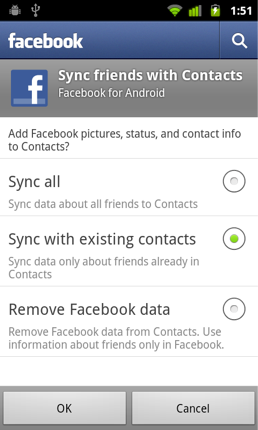 As part of today’s roll-out of Gingerbread updates to the Nexus One and Nexus S, Google also took an aggressive jab at Facebook: it has removed the ability of Facebook users to merge their ‘Facebook phone directory’ with the Contacts application on the Nexus S. In doing so Google has rekindled the battle over contacts that it initiated last November, in which Google has argued that Facebook is locking up user data. But before we get into the implications, it’s prudent to explain how things have worked until this point.

Right now when you fire up the Android Facebook application on the Nexus S for the first time, you’re given the option to ‘Sync friends with Contacts’. Enable the feature, and the next time you open your Android address book you’ll see your Facebook contacts — including their phone numbers, assuming they’ve added them to their Facebook profiles — listed alongside the contacts stored in your Google address book. In short, your Facebook and Google contacts are all seamlessly listed in the same place. It’s pretty nice.

But now Google has decided to turn off the feature on the grounds that users can’t export any of their Facebook contact data — they can see it in their address book, but the data isn’t actually stored as part of the phone’s contacts database. Which means that if they ever decide to leave the social network, they’ll find that their phone’s address book is suddenly missing a bunch of contacts and phone numbers.

So, Google has decided to ‘fix’ the problem by preemptively removing the feature before everyone gets too used to it. Here’s their statement:

“We believe it is very important that users are able to control their data. So in the over-the-air update for Nexus S, we have a small change to how Facebook contacts appear on the device. For Nexus S users who downloaded the Facebook app from Android Market, Facebook contacts will no longer appear to be integrated with the Android Contacts app. Since Facebook contacts cannot be exported from the device, the appearance of integration created a false sense of data portability. Facebook contact data will continue to appear within the Facebook app. Like all developers on Android, Facebook is free to use the Android contacts API to truly integrate contacts on the device, which would allow users to have more control over their data. We are removing the special-case handling of Facebook contacts on Nexus S and future lead devices. We continue to believe that reciprocity (the expectation that if information can be imported into a service it should be able to be exported) is an important step toward creating a world of true data liberation — and encourage other websites and app developers to allow users to export their contacts as well.”

Make no mistake: this is a calculated move on Google’s part, and one that has as much to do with spurring another wave of press coverage about Facebook’s siloing of data than it does with concerns over Android address book confusion. And it’s also sort of strange. Google says that Facebook should use the standard Contacts API like every other developer, but it was Google that enabled this functionality in the first place over a year ago, when the Nexus One shipped. Obviously there has been a lot of heated back-and-forth between the two companies since then, and Google may be concerned that users will increasingly start to use Facebook to house contact information and phone numbers when the integration is so seamless.

The reality is that while this will frustrate some Neuxs S users, most Android owners won’t care. The Nexus S only came out in December and caters primarily to early adopters, but the vast majority of Android users are on other devices that won’t see the change. In fact, Google isn’t even making this change on the Nexus One, explaining that because the Nexus One came with Facebook pre-installed, users expect this syncing feature as part of the out-of-box experience. But the Nexus S didn’t come with Facebook pre-installed, so it’s fair game. From a Google spokesperson:

“There will be no change in the way Facebook contacts appear on the Nexus One. Since the Facebook app was preloaded on Nexus One, it created an expectation for users of how the device would function. “

Even if Facebook doesn’t wind up changing its application (and I wouldn’t bet on it), the move makes one thing clear: Google isn’t done with this fight. Don’t be surprised if it takes the opportunity to point out Facebook’s lack of contact export at every opportunity, in the hopes that the general public eventually starts to pay attention.

Update: One thing to note is that Google says this applies to the “Nexus S and future lead devices” — in other words, whatever ‘official’ Android devices it will be releasing down the line. If any of those future releases do catch on with the mass market as opposed to the early adopter crowd, then the removal of this feature could actually impact a lot of people.