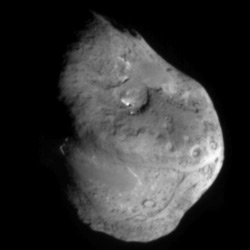 Where will you be tomorrow morning at 0437 GMT? If you’re a Nasa engineer odds are you’ll be glued to your many monitors, keeping a watchful on your Stardust spaceship as it approaches the Tempel 1 comet. The Nasa spaceship will be approaching the comet in part in order to take a look at the impact crater created by a previous spaceship’s probe back in 2005.

Stardust, the spaceship in question, has been hurtling through space since 1999, a time before Twitter and Blu-ray, a time when the just-retired Ronaldo was still in his prime. Its primary mission was to capture dust particles of another comet, Wild 2, and study their makeup. And it did just that, but to Nasa’s delight there was enough fuel in the tank to aim it toward Tempel 1.

Temple 1 has been been on quite a journey since we last smashed probed into it back in 2005. It’s made an orbit around the Sun, for example, meaning Stardust will be able to check out and compare the comet’s makeup to the previously collected data.

The overall point of carrying out this type of mission? Says Stardust’s point-man at Cornel University, Professor Joe Veverka:

We know that comets preserve interesting molecules, some of which could have been involved in the origin of life on Earth. So, the overall objective of these studies is to get to the point where we can return sizeable samples of cometary material for chemical analysis to answer the question, “Are we comet stuff or not?”

I believe Moby already explained that we’re all made of stars, but what’s our relationship to comets?