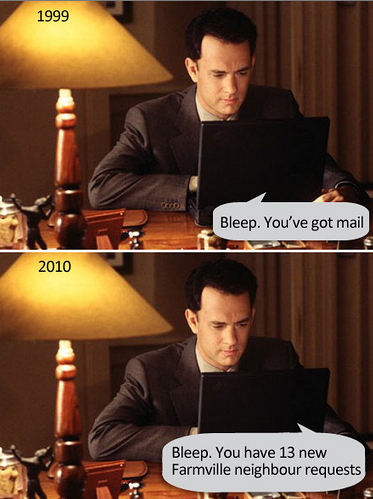 A while back a Seeing Interactive post entitled “You’ve Got Mail Is Ripe For A Sequel” went popular on Hacker News.

In You’ve Got Mail the movie, which is a bit of a joke around TC HQ because of its ties to Aol, The Shop Around The Corner, a small bookstore run by Meg Ryan goes out of business because Fox Books, a huge Borders-type book store run by Tom Hanks, opens up around the corner.

The “Is Ripe For A Sequel” post pointed out how differently that scenario would have played out now. Twelve years later,  Borders, affected by online book sales and sales of competing e-readers, is heading into a tailspin.

“Via everyone on the Internet, Borders is trading at 86 cents a share and has a market cap of 16 million dollars. It has around 700 locations valuing them at less than $100,000 per store.

It’s time for a sequel.”

In the short time since the Seeing Interactive post went up, Borders is now trading at 25 cents a share, with a market cap of 18.16 million (vs. let’s say rival Amazon’s 85.35 billion).

The WSJ is reporting that Borders is preparing for bankruptcy and might file for Chapter 11 at the beginning of next week — According to our old friends the people familiar with the matter. Apparently its plans to refinance and convert its unpaid debt into $125 million in loans were not convincing enough for publishers. The report also says that it will close 200 of its 674 stores.

Earlier today my colleague MG Siegler wrote about the Internet’s first victory of the day (something about Egypt):

“’I’m sorry, but there’s simply no role for the newspaper anymore. That’s not saying there’s no role for newspaper journalism, just the physical product itself. It’s a waste of paper, ink, and time. R.I.P.”

“I’m sorry, but there’s simply no role for the large, impersonal bookstore anymore. That’s not say there’s no role for book publishing, or even physical books themselves. It’s just that people just aren’t that into cookie cutter brick and mortar.”

On a more positive note (because I think this is sort of sad and am by no means celebrating), bookseller Barnes and Noble, which came out with the Nook e-reader to compete with Amazon’s Kindle and Borders’ The Kobo (yeah, I know), was trading strongly at $18.50 a share, with a market cap of $1.1 billion.