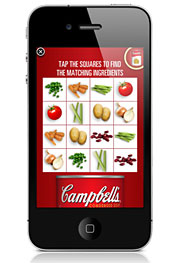 According to the soup company Campbell’s, Apple iAds are twice as memorable as TV ads to the general public. The iAd probably cost Campbell’s about $1 million whereas a similar TV campaign could cost a bit more than $25 million.

The Campbell’s campaign included a charming iPhone app as well, which could have improved the memorability of the ad. They were trying to get people to buy reduced-sodium soup, which is nice for them.

Out of 53 million ad impressions – which is pretty impressive – they got a 1% click-through. Not excellent, but not bad by any reckoning.

Now, to be perfectly clear, this survey was bought and paid for by Apple and Campbell’s and produced by Nielsen so take it with a grain of Mrs. Dash. Writes AdAge:

The brand is struggling with preconceptions of the decades-old brand and iAd was a way to frame the brand in a new light. “I think the combination of our news (of reduced-sodium condensed soup) and the new platform was great synergy and got people to think differently about Campbell’s,” Ms. Gordon said.

So on the one hand Campbell’s is trying to put the fear of God into the broadcasters by saying they may just move over to iPad advertising (though it will never happen) and Apple can crow that iAds is a way to think different when it comes to flogging low-sodium gruel. In reality, the differences in media – an interactive and bright interstitial vs. some lady jibbering about soup during an episode of V – are more to blame for this disparity than anything Apple or Campbell’s have actually done here. We’re moving into a brave new world here, and as more and more soup “apps” hit the app store, even the impressionable consumers who actually clicked on those ads will stop paying attention.