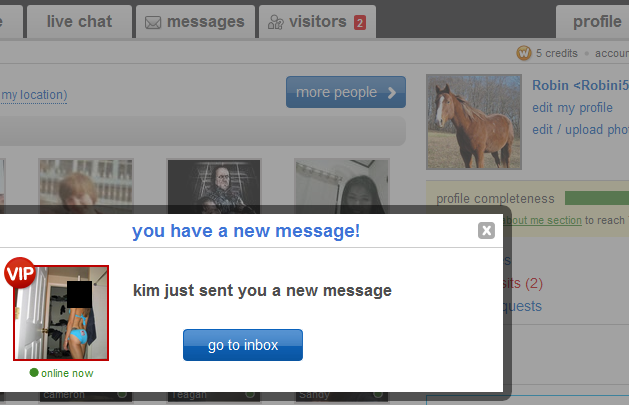 A friend just said I should sign up for WooMe with a picture of a horse instead of my own handsome face, just to see what happens next. Wow.

I know there’s a lot of fierce competition in the online dating industry, but I’ve rarely seen a site with tactics as aggressive as WooMe’s, which I should point out was a TechCrunch40 finalist back in 2007 (albeit with a slightly different positioning than today).

Since I’ve signed up for the site, again with a horse as my picture and in the middle of the night in the United States, I’ve been receiving a ton of unsolicited emails, direct messages, pop-ups, live chat sessions and alleged visits to my obviously fake profile by hot women.

And I only signed up about 15 minutes ago.

Now all I need to do to see who visited my profile or sent me all these private messages, is sign up to become a VIP WooMe member ($24.99 per month).

Ok, it may be a hefty sum, but I would love to virtually meet all these American babes that are trying to get a date with a (granted, beautiful) horse in the middle of the night. Plus I’ll gain privileged access to 10 million members according to WooMe. Yeah, but no. 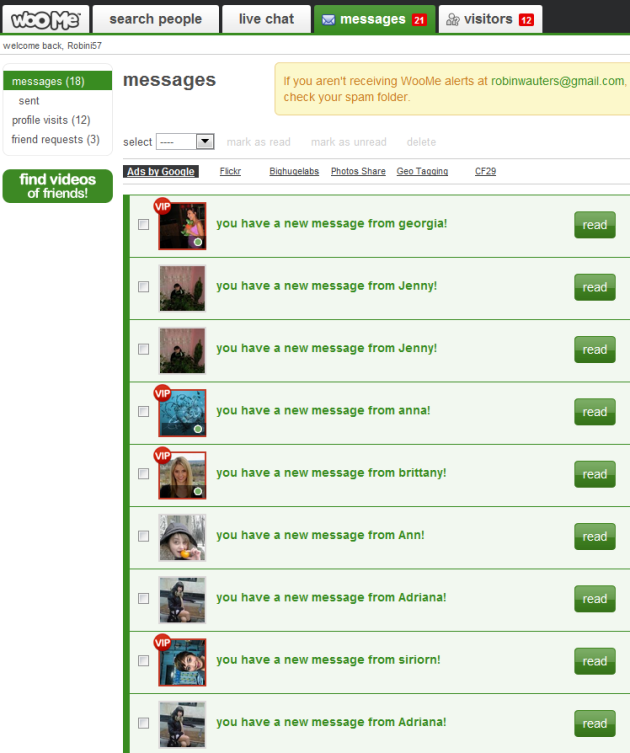 It’s crystal clear that WooMe targets anyone who signs up for the site with automated messages from women (WooMe staffers for all I know), within minutes. And there’s not a single thing you can do on the site that doesn’t lead to the payment page, where the company tries to lure you into registering for $9.99 per month (if you sign up for 6 months, and pay the whole amount upfront). It’s classic bait-and-switch, from the horrible kind.

I’ve never used online dating sites, so maybe all of them employ such aggressive tactics, but tough luck for WooMe that my friend thought I should see how a TechCrunch40 finalist behaves. My advice: stay far, far away from this site.

Shady as the company might be, it has attracted a slew of high-profile investors, who’ve pumped about $20 million into the company. Let’s see: all three of Europe’s finest venture capitalists, Index Ventures, Mangrove Capital Partners and Atomico Ventures have backed the company, together with leading angel investors Klaus Hommels and Oliver Jung.

All should be ashamed for pulling stunts like this.

Update: Stokols got in touch with me to ‘clarify’ things. He says I make inaccurate accusations, and that WooMe does not send messages from “fake” users. I would thus like to apologize to Georgia, Jenny, Anna, Jen, Britanny, Ann, Siriorn, Adriana, Sarah, Angie, Bri, Erica, Lana, Olly, Michele, Otu, Dream, Miracle, Catherine and Elizabeth (I kid you not) for claiming they’re not real women just waiting for new horses to make their appearance on the site.

Seriously, Stokols told me new users appear on top of people page results, which is why they get disproportionate attention after they just signed up. The only problem for him is that I’m talking seconds, not minutes after I registered. There was a message waiting for me by the time I signed up, which I had to pay for to read. There’s no way someone could have contacted me that quickly – even I weren’t such a pretty horse. 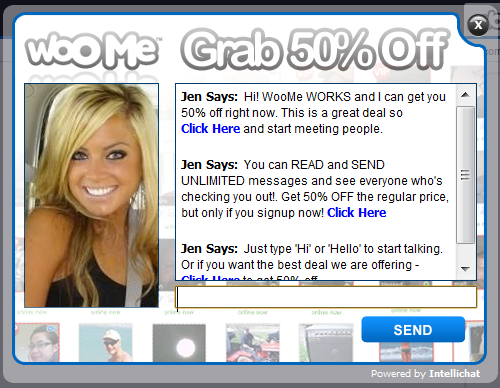