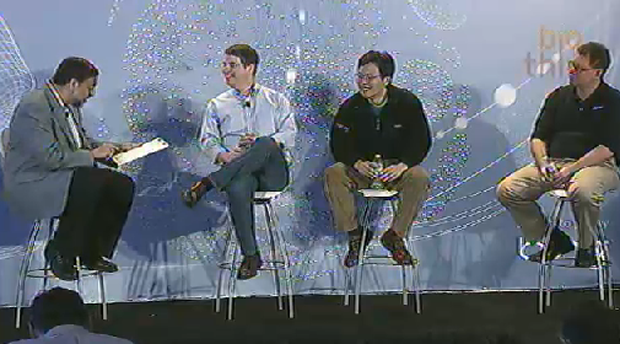 At the impeccably timed  “Who Will Win the Spam Wars” roundtable at the BigThink conference this morning, Google’s Matt Cutts, Bing’s Harry Shum and Blekko’s Rich Skrenta got together to discuss recent dramatic turn of events in the search market, most notably Google’s accusations today that Bing is using Google user data gleaned from Internet Explorer and the Bing toolbar to improve its own results.

Cutts took issue with Microsoft’s statement that they did not copy Google’s results, “Microsoft said they don’t copy the results and we have screenshots that prove that happened.” It does seem from Danny Sullivan’s post that Bing is tailoring its results with Google data, as Google’s honey pot nonsense queries showed up on Bing weeks later. See below: 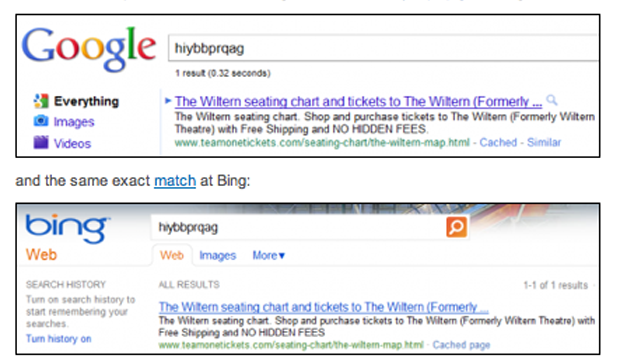 “Google engineers helped us discover a new form of spam. I wished the Google engineers had shared that with us before they went to press,” said Shum. He went on, “If you look at how each search engine ranks the results, Matt Cutts is referring to a few outlier examples. It’s not like we actually copied anything. We actually learn from our customers. Do you mean that Google owns the data?”

Later on in the panel Cutts still seemed stunned with Microsoft’s response, “I’ve been doing search for a decade and this is the first time I’ve seen something like this.”

Shum released a public statement going over many of his talking points, but namely reinforced the categorical denial of copying by Bing.

“To be clear, we learn from all of our customers. What we saw in today’s story was a spy-novelesque stunt to generate extreme outliers in tail query ranking. It was a creative tactic by a competitor, and we’ll take it as a back-handed compliment. But it doesn’t accurately portray how we use opt-in customer data as one of many inputs to help improve our user experience.”

The Bing copying Google imbroglio is the latest battleground as the search engine wars intensify. As panel moderator and TC contributor Vivek Wadhwa pointed out, it’s interesting that we live is a world where Google is now the monopolist, Microsoft is now a contender and Blekko is a fly on the wall.