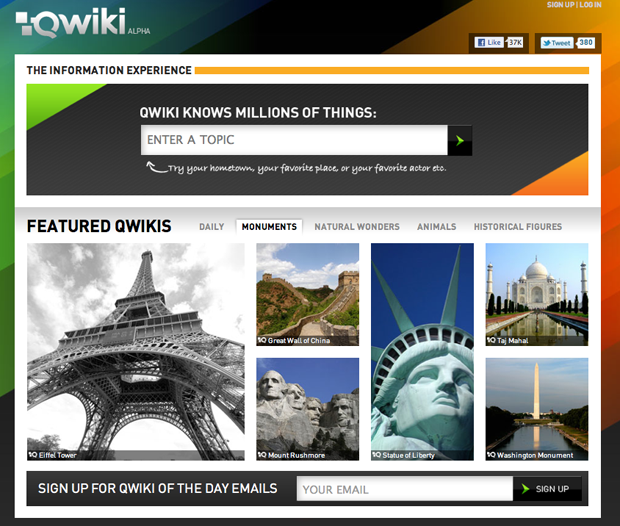 TechCrunch Disrupt winner Qwiki launches publicly at 12pm PST today after a week filled with the news, most notably that of an $8 million funding round led by Facebook co-founder Eduardo Saverin and YouTube founder Jawed Karim. Qwiki, for those of you who haven’t been following the hype, basically reads heavily Wikipedia-sourced articles out loud with photo and video accompaniments.

Heralding itself as an “information experience,” Qwiki has about 3 million reference topics at the time of its launch and hundreds of thousands of users according to a release. In testament to its success building buzz pre-launch, it was “spoof” cloned over the weekend using only 321 lines of code.

New features in the public alpha include “Share” or the ability to post, tweet, email or embed Qwikis, “Improve this Qwiki” or the opportunity to contribute content such as YouTube videos and pictures to Qwikis as well as give feedback on sound quality, and a text-based “Contents” section that includes all the information in a given Qwiki.

Qwiki plans on expanding to thousands of other content sources, building an iPad app and eventually releasing a custom publishing platform which will allow publishers to transform their own content into a Qwiki.

Created by Doug Imbruce and Louis Monier, the caliber of the Qwiki team is one of the primary reasons it has received so much traction pre-launch, as CTO Monier is the founder of one of the web’s original search engines, Alta Vista.

Says Monier about his latest endeavor, ambitiously, ” “Qwiki is not search – it’s a new media format and a groundbreaking method of consuming information.”

Here’s an embed sample and video of their TechCrunch Disrupt demo, below.