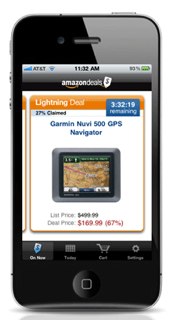 Amazon has been offering deals of the day via its Gold Box feature for some time now, but today the retail giant is ramping up the promotion of the deals with the launch of a new dedicated iPhone app.

Called Amazon Deals, the free app features the daily deals listed on Amazon Gold Box. Consumers can browse deals, shop directly from the app itself and also receive notifications if certain products go on sale. The interface is similar to shopping via the dedicated AmazoniPhone app. The app will also include “Lightening Deals,” which are limited, discounted offers on Amazon products.

For Amazon, the new iPhone app is a way to more actively promote its deals feature, and allow users to access the deals on the go. This also means that Amazon is getting more serious about the daily deals space, and could be a sign of things to come.

Amazon has steadily been ramping up its mobile shopping offerings, most recently launching Price Check, which allows users can scan the barcode of a product, take a picture of an item or say the product’s name to access product listings on Amazon.com’s marketplace. The company also released Window Shop, a shopping app for the iPad.