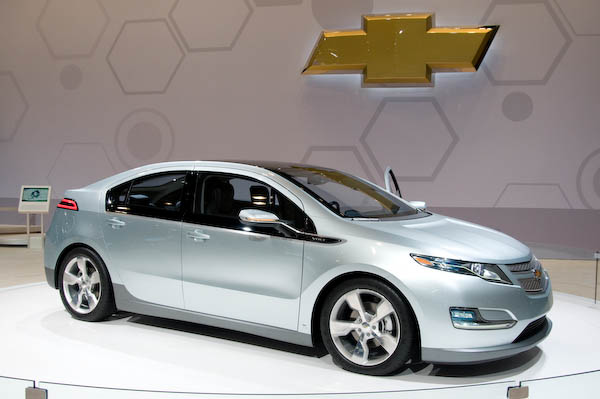 It’s official: the automotive press loves General Motor’s Chevy Volt as it walks away from the NAIAS as the North American International Car of the Year. The don’t-call-it-an-extended-range EV essentially sweep 2010’s consumer automotive awards, earning the top spot as Motor Trend’s 2011 Car of the Year, Green Car Journal’s 2011 Green Car of the Year, Automobile’s 2011 Automobile of the Year, and placing among the top ten in both Car and Driver’s and Ward’s AutoWorld’s 10 best of the year. So yeah, GM built a winner with the Volt.

The Chevy Volt’s story started out a short three years ago as a rolling concept and then quickly, it became clear that GM was dead serious about this car. Development timelines were beat and concepts shown-off. They even let us drive one of the engineering test mules in 2009 to show that yes, they had this thing on lock-down.

But then the production Chevy Volt numbers hit with an anti-dramatic thud partly thanks to the $41,000 sticker. It turned out that the Volt was an extended-range electric vehicle that could travel only 40 miles on the battery, but then the generator would kick on, powering the electric motor until the gas ran out. But that’s how GM had said all along the Volt would work. Consumers just didn’t seem to pay attention. GM delivered and the public was seemingly unimpressed.

The buff mags noticed, though. Motor Trend was the first out of the gate with its top honors, naming the Volt 2011’s Car of the Year. But as Rush Limbaugh and Motor Trend got into a war, the Volt simply trudged forward, seemingly winning an award a week with the latest just coming from the North American International Auto Show where 49 American and Canadian journalists picked the Volt over all the rest. At $41,000 the Volt isn’t a Malibu — or a third-generation Prius — but it is the perfect example of GM’s potential engineering and manufacturing capability. If only we were having the same conversation 4 years ago, GM would still be on top of the sale’s charts and not rebuilding a shattered image.