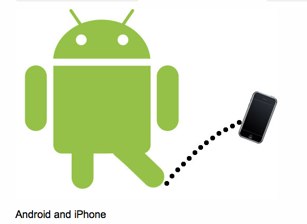 The latest mobile subscriber estimates are out from comScore, and for the first time in November, 2010, Android passed the iPhone in total number of U.S. smartphone subscribers. Comscore estimates there are 61.5 million smartphone subscribers in the U.S., and 26 percent of them own an Android phone versus 25 percent with an iPhone. In the previous month—October, 2010—Apple still edged out Google with 24.6 percent market share versus 23.5 percent.

These numbers are for all existing smartphone subscribers, which is different than sales of new phones—where Android is also ahead of the iPhone.

Blackberry still has the largest installed base of smartphone users in the U.S. with 33 percent market share. But that share is down 4 percent over the past three months, while Android’s share grew 6 percent. Apple’s share is up a little less than 1 percent, indicating that the iPhone is saturated in the U.S. through its current partner, AT&T. Once Verizon starts selling iPhones, the question remains whether that will help boost Apple’s overall share, or simply eat into AT&T’s sales.