Fragmentation. Curation. Recommendations. Take your pick: Android is getting all three, compliments of a new Amazon-run application marketplace due to launch later this year.  Today, Amazon has launched the developer-facing part of the store, inviting devs to submit their applications so that they’re ready when the app store is ready for its consumer debut later this year (Amazon isn’t giving a firm date on the full launch). The developer portal is at http://developer.amazon.com.

We reported on this impending news back in September, so it isn’t a huge surprise. But it’s going to bring some very interesting dynamics to the way Android applications are purchased and distributed. In some senses, this is the Android equivalent of Apple’s App Store — even more so than Google’s official Android Market.

I spoke with Aaron Rubenson, category leader for Amazon Mobile Services, and
Ameesh Paleja, general manager for the Engineering Division of Mobile Services, about the new store, and it clearly has the potential to be a big deal.

First, some background for those who don’t follow Android too closely. All Google-endorsed Android devices ship with the Android Market, along with a suite of other Google-made applications like Gmail. Android Market is a lot like Apple’s App Store with a few key differences: it doesn’t have an approval system, so developers can quickly submit and iterate on their applications. It also tends to have a lot of junky applications that Apple would reject — things that crash on launch on certain devices, or apps with that occasionally have features that don’t work as expected. While Google’s terms do require descriptions to be accurate, the general attitude is to let the market decide what works, and it surfaces the top rated applications (most of the time) while letting the junk sink.

Amazon is taking an approach that is more in line with Apple’s. Developers who wish to appear on Amazon’s store have to get approval (Amazon says that the process is currently taking about a week). And Amazon is going to have slightly more stringent guidelines: your application has to work properly (i.e. it can’t crash right off the bat) and it has to do what you say it does. It also has to be safe. Android Market has many of these same requirements, but the difference here is that Amazon checks apps before they’re deployed to its store, while Google does so after problematic applications are reported.

The bottom line here is that Amazon will be offering discounts on some applications (possibly making them much cheaper than the same application on Android Market or elsewhere). That sounds like it could be a recipe for frustration for some developers, but Rubenson and Paleja say that they’re going to do everything they can to maximize the amount of money developers make, and that sometimes that involves adjusting pricing. They also say that Amazon has an incentive to keep developers happy — and that developers can remove their apps from the store with ten day’s notice. We’ll have to wait and see if the system works.

So why, aside from these pricing differences, would consumers want to use this Amazon App Store at all? There are a few answers to that question.

The first is that there are manufacturers making Android devices that decide not to partner with Google to offer the official suite of Google applications (including Android Market). Amazon is happy to offer their store to these manufacturers, and it will work on any Android device version 1.6 or up. So if, for example, Facebook releases its own flavor of Android down the line, they could include Amazon’s App Store. 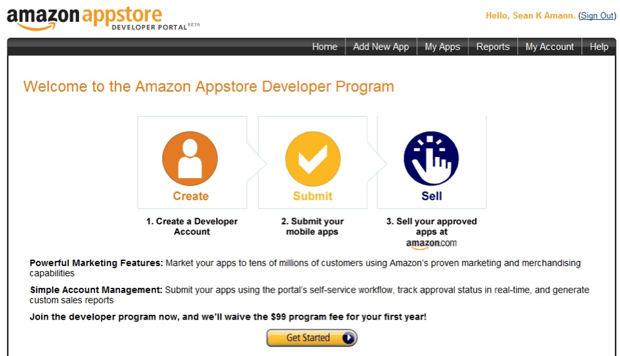 Reason number two: Amazon says that it can offer recommendations using the technology that already exists on Amazon.com. This includes the obvious example of showing applications that are similar to each other, but Amazon will also be looking for correlations between physical products and apps — it might start recommending a popular baseball app to someone browsing for a baseball bat, for example. And it’s going to be promoting these applications as users browse Amazon.com.

Amazon says it’s premature to talk about what the store itself will look like, but they did share a few details about the consumer experience. First, payments unsurprisingly will be done using Amazon’s one-click payment system (which already has tens of millions of credit cards on file), though developers can integrate whatever transaction system they want into the app itself.

Customers will be able to browse through applications from their phone or on Amazon.com using their desktop computers, and they’ll be able to ‘send’ applications they buy to their mobile device. This sounds similar to what Google showed off at Google I/O, but with one minor caveat: the apps won’t actually be pushed and installed immediately, it sounds like you’ll have to fire up the Amazon application to do that.

So how will people actually get access to this Amazon marketplace from their Android device? This is going to prove a bit tricky for some users — Amazon will offer a walkthrough instructing users on how to do this, but it will require you dig into the settings menu on the device and allow installation from “Unknown Sources”. It’s easy to find if you know what you’re doing, but it sounds a bit scary. However, Amazon is also in talks with various partners, and we’ll likely be seeing plenty of applications shipping with the market pre-installed.

Now, Amazon isn’t the only company that’s making alternative Android App Stores — Verizon is also doing one of its own, and there will surely be more to follow. But Amazon is in a position to establish itself as the de facto non-Google App Store — and that could prove to be very important. As Kevin Marks wrote recently (and we discussed further), Android is going to increasingly fragment into flavors that aren’t as closely tied to Google, and we’ll start seeing more alternative versions of the core ‘Google Apps’. Amazon’s App Store would fit in nicely as one part of this alternative suite.

This will also bring pricing battles over the same applications into the equation (which hasn’t really been possible when app distribution is monopolized by a single storefront). And, yes, it could lead to some user confusion, though Amazon has a strong incentive to keep this as straightforward as it can.

Make no mistake — this isn’t going to replace Google’s Android Market by any means. Google’s store will have better international support for some time (Amazon is US-only at launch) and it will still be shipping on plenty of phones by default. But given how many Android devices are going to be out there in the near future (they’re activating over 300,000 a day), there’s certainly going to be enough customers to keep more than one store in business.

I asked a few times about timing for the consumer launch but couldn’t get anything more specific than “this year”. However, the team did say that the mobile storefront is being built with tablets in mind, so my guess is that we can expect this to launch after Android tablets running Honeycomb are on the market (which will probably be around April or later).

I asked the Amazon team how Google felt about the launch — there was an audible chuckle, and they said something about Android being on an amazing growth trajectory and that they were fond of its openness.

Android is an open platform – and entities other than Google are free to create their own content and marketplaces, much like the web.