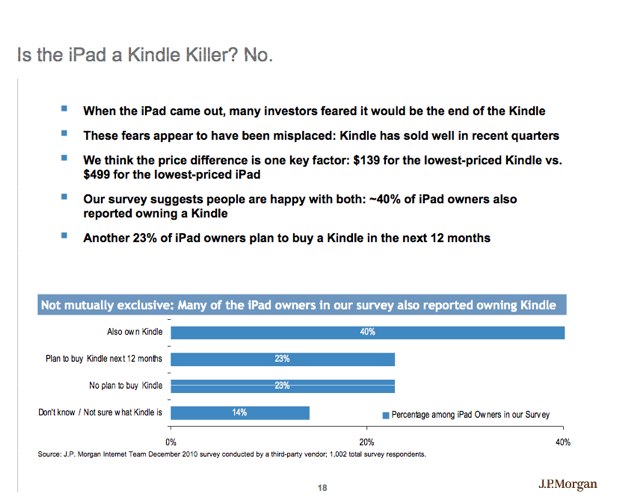 While plenty of people predicted that the iPad would kill the Kindle when it first came out (including us), that turned out to be wrong. Very wrong. The Kindle went on to become the best selling product in Amazon’s history over the holidays, selling an estimated 8 million units last year.

The Kindle is a very different device. In fact, in a recent survey of about 1,000 consumers by JP Morgan’s Internet team, 40 percent of iPad owners also own a Kindle. That sounds a little high to me, although it does describe everyone I know who owns an iPad. According to the same survey, another 23 percent of iPad owners plan on buying a Kindle in the next 12 months. 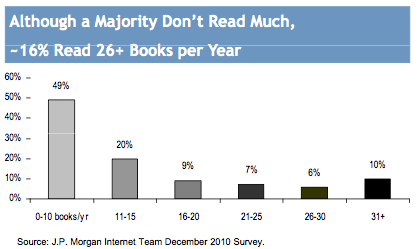 The Kindle appeals to heavy readers. Bookworms are a niche audience, but a lucrative one. About half of the people surveyed read between zero and ten books a year. But 16 percent read more than 25 books a year.

The big takeaway here is that the iPad and the Kindle are perceived as different types of products, and rightly so. Amazon has done a good job marketing the Kindle as an ebook designed specifically for book lovers, and at $139 for the lowest-priced Kindle it is seen as a different class of device than the $499 iPad. (It also doesn’t hurt than you can use the iPad as a Kindle reading device, removing the need for consumers to make an either-or decision).

Amazon’s aggressive Kindle advertising is also paying off. The Kindle has 76 percent brand awareness, which is almost up there with the iPad’s 84 percent. And that is much better than its direct ebook competitor, the Nook, which has 45 percent. And 28 percent of respondents say they either own or plan to buy a Kindle in the next 12 months, compared to 7 percent in July, 2009. 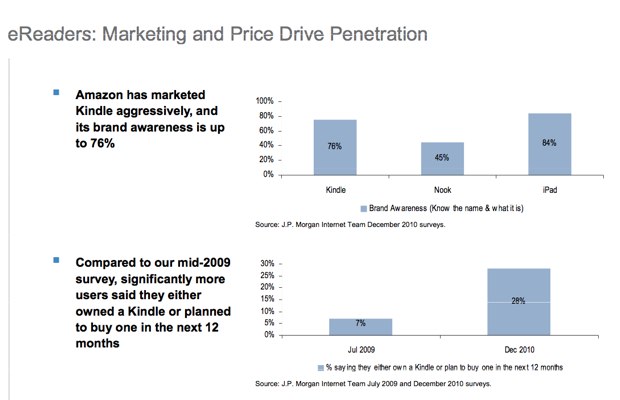