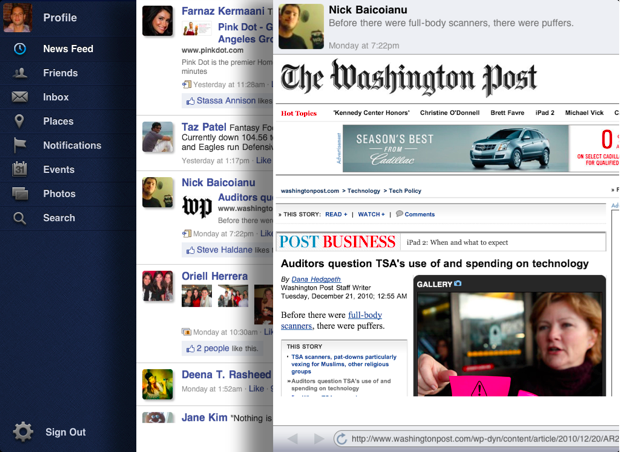 In what has become one of the not-so-great mysteries of technology, Facebook still hasn’t launched a native iPad application nine months after the device made its debut, despite the fact that many thousands — perhaps even millions — of people search for it every day.

Of course, that hasn’t stopped some enterprising developers from launching Facebook applications of their own — ‘Friendly for Facebook’, which is made by a third-party, has become one of the App Store’s most successful applications. But that application is hardly perfect, and now it has a new challenger: Facepad, a Facebook application that has clearly taken many design cues from Twitter’s innovative iPad application, which was released in September.

The similarities are obvious, but that isn’t a bad thing. The biggest involves the way new windows are handled: just like Twitter for iPad, when you tap on a link to a piece of content Facepad will slide a new window onto the right hand side of the screen. This allows you to quickly jump to a linked article and then back to Facebook without losing your place, or between multiple friend profiles — something that isn’t so easy using a normal web browser. The application allows you to keep dozens of these tabs open at once, so you can flick across a bunch of profiles in a few seconds.

It’s pretty slick, and people seem to like it. Since launching last week, Facepad has managed to get quite a bit of organic growth. In its first twelve hours the application served over a million ad impressions — that doubled to 2 million impressions after 24 hours. Now the app is up to tens of millions of page views and is the 15th most popular application on the App Store overall.

At its core though, Facepad is still a reskinned version touch.facebook.com, the web-based version of the social network that Facebook has optimized for touchscreen displays (Friendly, another third-party app mentioned earlier, also uses touch.facebook.com as its core). This means that, aside from the handy nav bar at the left hand side and the window swiping, much of the application still feels like a regular website, which isn’t ideal.

Cofounder Cole Ratias says that will change with the launch of Facepad V2 — the team is working to make the whole application feel more like a native app, so you’ll be able to do thinks like flick through photo albums the way you would in the iPad’s default photo application. Ratias also says that the team doesn’t want to implement anything that feels half-baked — for example, he points out the chat feature in Friendly, which takes up the full screen and feels a bit clunky. Facepad will also offer chat, but not until it can present it in smaller window overlays.

Facepad is the first product from a new startup called Loytr, and the company has bigger ambitions than just becoming a better way to browse Facebook (though they’ll take that, too). In the future the company plans to integrate a gaming platform into Facepad featuring Facebook Connect-enabled, casual games that use Loytr’s APIs for monetization and other functionality (this way Loytr will be able to take a cut of revenue). The company has other plans beyond Facebook, though Ratias declined to describe them in much detail for now.

Of course, there’s little doubt that Facebook is going to be release something that’s better suited for the iPad’s large display — but based on comments from CEO Mark Zuckerberg, when it comes, it may well be based on HTML5. Zuckerberg says that Facebook doesn’t currently have enough resources to develop separate native apps for each platform, so it makes sense to make a web-based solution.

One big thing to note: the current version of Facepad has a bug that will cause it to crash on iPads that are running iOS 3.2. That’s an older version that lacks key features introduced in 4.2, like multitasking, but a significant number of users are still running it. Facepad has submitted an update that fixes the bug and is waiting on Apple to approve it. Update: The new version has been approved, and you can grab it here. 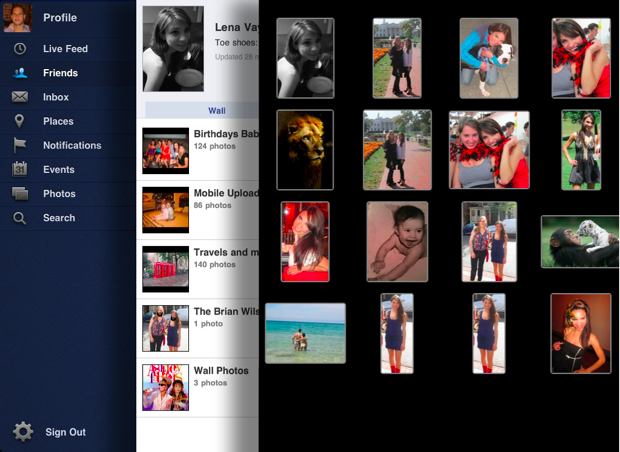