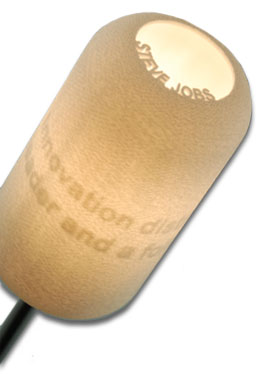 Making predictions is a sure fire path towards getting ridiculed. But, I’ll be brave and go right ahead and make 11 predictions for 3D printing in 2011.

Makerbot will sell more than 10,000 3D printers in 2011.
To put that in perspective, there are approximately 30,000 3D printers in the world today. Makerbot would have to scale to meet this kind of production but given their strong brand and loyal following it should, together with some prime time TV coverage, be possible.

Bre Pettis will appear on the cover of Bloomberg Businessweek magazine in 2011.

Bre Pettis is the congenial Maker in Chief of Makerbot. Possibly he will be holding a Makerbot. And for all you Kevin Rose watchers out there, this will not be the beginning of the end.

A designer will have revenues of over one million US dollars with a single 3D printed product in 2011.
An injection molded product does not count, even if it was prototyped using 3D printing. The revenue must come from the sales of the 3D printed products themselves. A label that designs many products will also not count since this has happened before. Several designers have revenues of hundreds of thousands of dollars selling 3D printed items ranging from chairs to jewelry currently. As many designers get more knowledgeable with the 3D printing process and media coverage increases a million dollar hit is only one good design away.

Both Stratasys and Objet will release $5000 desktop 3D printers at Euromold 2011.

$5,000 is the new $20,000. Most entry level desktop 3D printers by companies such as Stratasys & Objet cost around $20,000 now. The Makerbot and Bits From Bytes 3D printers are available for around $1000 in kits and $3000 assembled. 3D printing services are also expanding and disrupting the market for 3D printers. I’m guessing people will read The Innovators Dilemma and reluctantly rush towards offering 3D printers around the $5000 mark. The $5,000 price point is well established by the now defunct Desktop Factory and so would be an illogical but obvious price point for 3D printer manufacturers to work towards. Both Stratasys and Objet’s technology could be stripped down to make a $5000 3D printer.

Zcorp & EOS will be the only major 3D printer manufacturers not to offer a desktop 3D printer in 2011.
In two blog posts Zcorp’s Vice President of R&D expresses strong skepticism about the need for and usefulness of consumer 3D printing. This to me points to Zcorp focusing more on improving its existing technologies and in expanding its technology base by using the Envisontec Ultra technology and improving the materials and process of the Ultra machine. A likely path for Zcorp is making recyclable and biodegradable materials and in then later positioning themselves as the “green 3D printing” player.

EOS on the other hand has made no move whatsoever towards the desktop market. It seems content to make further advances in direct digital manufacturing and its product portfolio and advances indicate this. It would be difficult to make an affordable Selective Laser Sintering system at the moment and even though it could (with some advances and a huge reduction in the cost of lasers) be possible EOS would seem to have huge opportunities in capturing market share in the direct digital production market for medical and industrial manufacturing right now.

3D Systems will launch a 3D printing service for consumers in 2011.

3D Systems has been playing the M&A game quite seriously over the past year acquiring Bits From Bytes and a string of 3D printing services worldwide. Their Marketing Manager is Cathy Lewis who used to be the CEO of consumer facing Desktop Factory. The combination of these assets shows a strong urge to become big in the consumer 3D printing market, and a 3D printing service aimed at consumers would make sense in that light.

At least five 3D printing startups aimed at consumers will launch during 2011.
With all the media & VC attention given to 3D printing many MBA-types will be pining over how they will make their fortune in the 3D printing business. Their thoughts are always towards barriers to entry, scalable etc. Also, web services are something they think they understand so they will come up with “3D printing on Facebook”, “its like i.materialise but for..”, 3D printing for the iPhone, etc.

Adobe will buy Autodesk in 2011.
Adobe understands the network effect and with its Reader software makes (somehow) millions by letting people publish and read documents. With more and more information being held in 3D formats “going 3D” would seem to be a logical step for Adobe. Reading, opening and editing 3D formats is a mess and ripe for consolidation. Autodesk’s stock performance recently has improved but still not reached the highs of the mid-2000’s. Executives have left and the company has experienced a lot of weakness due to its exposure to the AEC (architecture, engineering & construction) market. The company’s are giants in their respective markets and the tie up also somehow feels right.

Microsoft buys Dassault Systemes in 2011.
Dassault Systemes also seems to understand the network effect and its 3DVia software suite is a clear play to become the “Reader of 3D. “ The company is very strong in B2B engineering and 3D modeling software with Solidworks and Catia. It is also a giant in PLM. And product lifecycle management software would seem to be the way in which companies can manage the creation of intellectual property. It’s an illogical but prestigious asset to its defense contractor shareholders and its stock price has surged over the past years due to canny take overs and growth. This would not come cheap, but Microsoft with all its “SAP money” could make the acquisition and become a giant in 3D creation and engineering. Dassault would be a much more logical fit for Microsoft than the Google inspired acquisitions it has made over these past years. French protectionism and complex shareholdings would complicate matters however.

Both Solidworks and Rhino have experienced immense market growth due to inexpensive Student versions of their software driving demand for later adoption by companies and freelancers. Blender has become a huge by being a vibrant community and free. SketchUp has obtained many paid users because of its free to use versions. But, full versions of many 3D modeling packages cost anywhere from several hundred to several thousand dollars. There is a huge gap between the free alternatives and the fully paid versions while the “seeding strategy” seems to work well for the industry. An expected influx into 3D modeling by enthusiasts and broader adoption of 3D modeling software should drive growth. However these people are likely to turn to free or inexpensive versions of easy to learn packages first. And despite the industry’s best efforts, no package is easy at the moment. A possible solution would be to offer stripped down inexpensive 3D printing specific light versions of popular 3D modeling applications. These would be easier to master and cheaper to buy.

Design label .MGX has been winning a host of awards for its 3D printed work lately. Furthermore its works have been added to the permanent collection of the MOMA and the Smithsonian National Design Museum. Objet won a Red Dot for its Connex 3D printer in 2008 and designer Janne Kyttanen won a Red Dot back in 2005 for his LILY.MGX lamp. With many new designers active in the field producing attractive and groundbreaking work two Red Dots might be achievable.