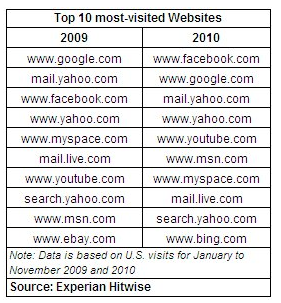 While Hitwise came to the same conclusion back in March, this is the first time Facebook has been named most visited site of the year (crowding out last year’s winner Google). Comscore also shows Facebook.com passing Google.com in visits in November but all Google sites as still having more. According to Hitwise, visits to Google properties combined cover 9.85% of all site visits, making Google a formidable opponent.

“Facebook” also ranked #1 for most searched term of the year directly in front of the hilarious “Facebook login” at #2.

You can read the full results here.