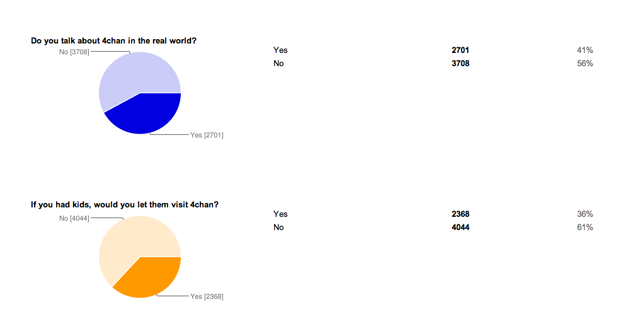 Over the weekend, a interesting demographic survey of over 6000 4Chan users made the rounds of 4Chan, Reddit and Hacker News. While if anyone is going to skew a survey it’s 4Chan users, the Google document with the responses given a lot of Internet ink, lauded for being “bracingly honest.”

I emailed 4Chan founder moot a.k.a Christopher Poole to get his take on what one commenter called “One of the best representations of the youth in the 21st century.” “It’s total garbage,” Poole responded.

When asked if this was yet another example of media trolling (remember TIME’s “Person Of The Year 2009″?), Poole clarified “It’s ‘real’ in the sense that a random user conducted it and I imagine he collected responses on 4chan. But the questions, answers, sample, method used, etc aren’t exactly scientific. It should be taken with a massive grain of salt.”

Poole tells us that 4Chan itself does not collect any sort of demographic data and that there are no plans to conduct any sort of official OKCupid-type survey, “Kind of defeats the point of an anonymous message board, doesn’t it?” Heh.

You can view the full results or take the survey yourself here.