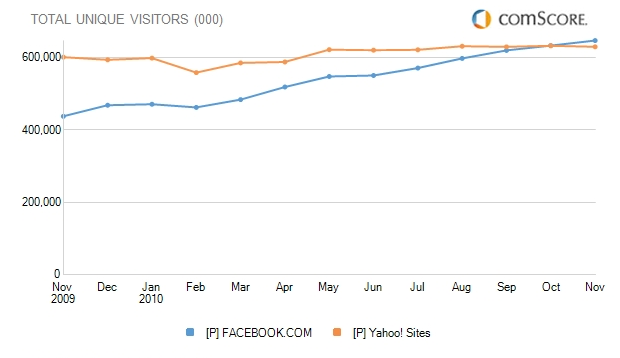 We’ve seen this one coming all year. Facebook is now the third largest website in the world, taking the No. 3 spot from Yahoo, according to comScore. Facebook drew an estimated 648 million unique visitors from across the globe in November, 2010, compared to 630 million for Yahoo. In October the two sites were dead even with 633 million worldwide unique visitors each (actually Facebook had already passed Yahoo by a smidgeon in October with about half a million more visitors). The only two Web properties left which are bigger than Facebook are Microsoft (869 million worldwide visitors) and Google (970 million) when you look at all of their sites collectively.

The evidence leading up to this overthrow has been building up for a long time. Facebook became the fourth largest Website in the world nearly 18 months ago, and quickly passed Yahoo in pageviews. Today, Facebook accounts for nearly a quarter of all display ads in the U.S., which is more than twice as much as Yahoo.

Facebook also recently passed Yahoo to become the second largest video site in the U.S., and is also the ssecond largest source of traffic (after Google) to other video sites on the Web. No wonder Yahoo CEO Carol Bartz sees Facebook as her biggest competitor, not Google.

In the U.S., however, Facebook is still No. 4 in terms of total monthly visitors (with 152 million), and Yahoo is No. 1 (with 181 million). So not all is lost. Note also that these comScore visitor estimates are different than Facebook’s official user numbers which are somewhere north of 500 million worldwide, but they are better for making apples-to-apples comparisons between sites. 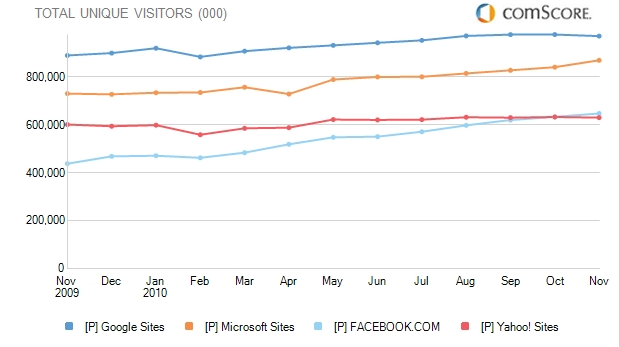