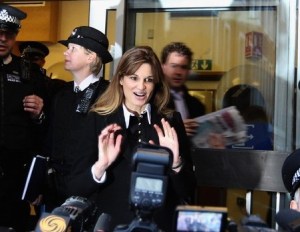 I think we can all agree that the one thing the world needs right now is another column about Julian Assange.

I’m sitting in a hotel bar about an hour north of London, and spread out on the table in front of me are all of today’s British newspapers – from the Mail on Sunday to the Observer. Every single one of them contains – within the first few pages – a news story or opinion about the antipodean face of Wikileaks.

Online, it’s a similar state of affairs. You can’t move your mouse pointer today without rolling over an Assange fanboy blogger, either propounding conspiracy theories on the real reason for his imprisonment, or demanding to know why Time cruelly overlooked their man for “Person of the Year”. (My theory: Time is wisely sticking to its policy of waiting for controversial people’s stories to play out a bit before putting them on the cover. The whole Hitler thing back in ‘38 rather bit them on the ass.)

With a few traditionally skeptical exceptions, the media mood – online and off – is one of satisfaction for a job well done. Assange is out; free to spend a cosy Christmas tucked up in a grand old English stately home, as opposed to – say – voluntarily returning to Sweden to face the allegations made against him.

His reluctance to go to Sweden voluntarily is odd, by the way, given that a) his supporters are so convinced of his innocence and b) current legal opinion suggests that it would be even harder for the Americans to extradite him from there than from the UK. Maybe being held accountable only swings one way, like a kitchen door. Or perhaps Assange just likes the idea of spending yuletide in a nice big castle which, we’re told, boasts an excellent Internet connection. Watch out, kids, he’ll be leaking the contents of your letters to Santa before the day is out. THE PUBLIC HAS A RIGHT TO KNOW!

Anyway. For now at least, Assange’s high profile supporters (including Jemima Khan, above, and Michael Moore) in both the media and the world of celebrity have put down their placards, returned to their luxury homes and are looking forward to taking a couple of weeks off to sing Christmas songs and bask in the glow of victory. And as for Julian himself…

“Assange said today his nine days in solitary confinement in a British jail had made him angrier than ever and steeled his resolve to continue the WikiLeaks project… His strong rhetoric came just moments before entering the plush Ellingham Hall, his place of “mansion arrest” in the British countryside.”  – The Australian

Let’s leave them, then – Dickensian narrator style – and fly away from London, across the Atlantic ocean, and down to the walls of a heavily guarded military prison in Virginia. Where, if the brig at Quantico had windows – which is doesn’t – we might just catch a glimpse of young Bradley Manning, as he prepares to spend Christmas slowly rotting in solitary confinement.

In case you’ve forgotten, Private First Class Manning – surely the most comically inappropriate honorific since the McChicken Supreme – is the 23-year-old soldier accused of passing thousands of diplomatic cables to Wikileaks in the first place. Specifically he’s accused of downloading 260,000 documents onto a CD, before disguising the disc as a Lady Gaga album and passing it on to Assange. He’s also accused of passing on the infamous “Collateral Murder” video. Thanks to the splendid reporting of Salon’s Glen Greenwald, we know that Manning spends 23 hours a day in his cell, where he is banned from exercising or doing anything else which might help prevent him going mad. He’s already been there for five months (plus two prior months in prison in Kuwait) and it doesn’t look like he’ll be leaving any time soon.

Whether Manning is innocent or guilty (he is yet to be tried, although Greenwald quotes chat logs in which Manning apparently admits to being Wikileaks’ source) is really beside the point. The point is he’s in prison because the American government believes him to be Assange’s cable dealer; the person without who’s assistance Julian Assange would still be working as a waitress in a cocktail bar (and possibly sexually assaulting himself). Assange himself rarely – if ever – mentions Manning, citing Wikileaks’ policy of neither confirming nor denying its sources. That this policy also allows Assange to keep the media’s spotlight pointed squarely at his own face is surely just a coincidence.

(It’s worth noting that Assange’s statement from prison included a call for the world to “protect my work and my people from these illegal and immoral attacks” – emphasis mine – which might lead a cynic to conclude that Wikileaks is nothing more than a huge self-aggrandising stunt by someone who can’t even write an OKCupid profile without sounding like a less GSOH version of Marx and Engels.)

The contrast between Assange’s current situation and that of Manning couldn’t be more stark. Nor could the difference in certainty regarding the men’s fates: we’re told Assange might be extradited to America, where he could face a grand jury, a high profile trial and possibly–maybe a lengthy jail sentence. For Manning, jail is the definite starting point: the crap-calm before the shit-storm. And yet it’s Assange – the alleged sex pest with a website – rather than Manning – the apparent actual leaker of secret documents – who is the cause célèbre, gurning out from the world’s front pages every day. Could there be a more damning indictment of our celebrity-driven culture than that?

I’ve made clear since the beginning of this sorry story that I have very little sympathy for Wikileaks, and I have even less sympathy for a junior soldier who, it is alleged, took it upon himself to leak information that was already shared amongst hundreds of thousands of trusted Americans. As I wrote here, the inevitable result of Wikileaks is less, not more, diplomatic openness.

And yet for all my cynicism, I would dearly love to see Assange’s celebrity supporters marching on Manning’s jailers with the same furious cries of “Habeus Corpus!” with which they demanded their media-friendly hero’s release. It would certainly show that they were serious in their convictions: unlike springing Assange from Wandsworth prison – which simply involved throwing money at the problem – getting Manning out of Quantico would put campaigners directly at odds with the might of the US military, and would drag them into a case that will take years – maybe even decades – to resolve, mostly away from the glare of the TV cameras.

But then again, where would be the fun, or the glamour, in that?