Facebook’s having a pretty interesting day. This morning the site pushed out a nifty new registration widget for third party sites. In the last few hours it’s also pushed out a revamped version of its Pages, which brings the UI more in line with its updated profiles design, which launched earlier this month. And there are multiple reports on Twitter about a new “Memories” feature that lets you scan through your entire history on the site.

Unfortunately, you can’t see any of these right now, because Facebook — and the myriad Like buttons scattered across the web — are all down hard. Update: It’s back up for me as of 1:45 PM PST.

Given its massive distribution and the fact that it services as the primary login system for many sites, any downtime for Facebook is a big deal. We’ll update once the site comes back up — looks like it’s been down for around 15 minutes so far. For the time being though, let’s recap the features that Facebook rolled out (apparently a bit too quickly).

The new Facebook Pages look a lot like Facebook Place pages and the updated user profiles. Application tabs have been moved from a nav bar resting on top of the Wall to the left side-bar, just beneath the Page’s main image. Pages can also now feature lists of Facebook users, the same way you can feature your friends on your Facebook profile. There’s also a new button that lets page administrator ‘Login as Page’, which lets you receive notifications for just your page, and not your personal account.

Facebook Memories is still a bit mysterious because it was only showing up for a few minutes at a time, according to numerous tweets on the feature. The Next Web nabbed a shot of the navigation bar for Memories (seen below) but it doesn’t do much to show what the feature actually looks like.

From the reports on Twitter, Memories lets you jump through your entire history on Facebook, allowing you to scan through all of the comments, photos, and connections you’ve established over time. Some users are describing it as creepy, and it’s not clear if you can look at the Memories tabs of your friends (which would be a little weird) or just your own. Let us know in the comments if you got a chance to try out the feature, we’ve reached out to Facebook for more information. 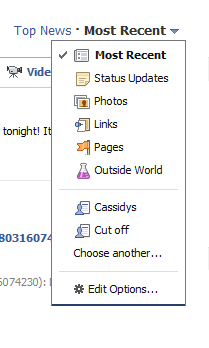 Update:: Facebook is back up now, but it seems that the updated Pages design and Memories are gone.

Update 2:: Facebook is also apparently testing a new option for News Feed called ‘Outside World’. It’s unclear what this is, but it may be a ranked list of hot news stories, videos, and other content that’s been shared online. This image is from Casschin on Twitter:

Update 3: Facebook has just tweeted that “some internal prototypes were exposed to people and resulted in us disabling the site briefly. It’s now back to normal.” So looks like we won’t be seeing Memories or the ‘Outside World’ view just yet.