Google TV launched to a storm of piss-poor reviews and first impressions. It feels like a beta product and not something ready for living rooms. But that’s Google’s way. Two months have passed since the Logitech Revue and Sony Internet TV line launched and Google just rolled out the first major software update that at least seems to address some of the early concerns while bringing some new features to the platform like searching by voice.

Content discovery is one of Google TV’s strong points, but while the system can find just about any TV show online, big media blocked access. The updated Netflix app nearly solves this little problem by allowing access to the entire Netflix library. Now you can search, browse, and watch any of the shows in Netflix’s catalog without interaction from a PC. You can even select titles to be snail-mailed to you. 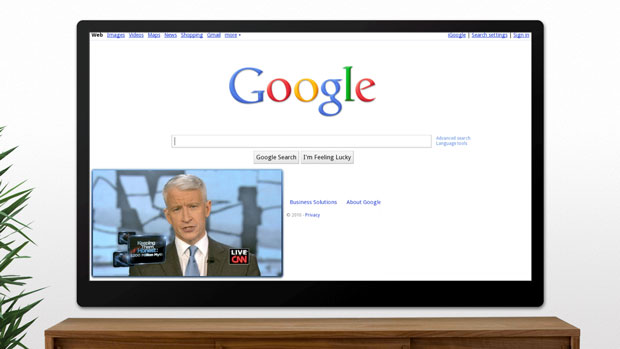 Dual-view was one of our favorite launch features. It’s basically PIP, but where one of the pictures is an internet browser. The new mode allows users to change the size and move around the smaller window. Yeah, Google TV finally has the same capability as your ’90s era Sony Trinitron.

Google TV Search is by far the most powerful TV content discovery tool available right. Google has done the same thing with movies too. Think IMDB. Search for a movie, and it will display the movie results while allowing you to navigate to the actor’s profiles and previous roles. The results even included other films associated with the original searched item and where they’re available to be watched being live TV, Netflix, or Amazon.

The Logitech Revue launched with an Android app that offers basic controls over the Revue’s functions. Now Google has one of their own that includes voice search. The demo below shows off the interface that at least makes it look better than the Logitech version. “Stay tuned for more information about the Google TV Remote for other platforms in the near future.” So yeah, that means an iPhone apps is coming too.

Expect this update to roll out to current devices throughout the week. Our testers have yet to receive the update, but I can’t wait. Hopefully there are some under-the-hood changes not mentioned that smooths out the rough interface a bit.