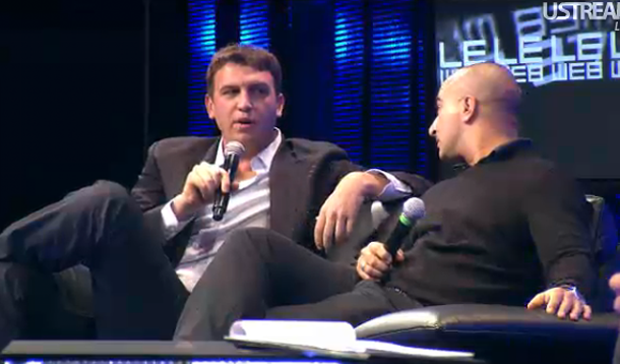 On the “How To Get Acquired” panel here at Le Web, Microsoft Senior Director of Corporate Strategy and Acquisitions Fritz Lanman admitted to Loic Le Meur that Microsoft did try to acquire the social network Facebook. The Microsoft/Facebook acquisition talks were first reported by David Kirkpatrick in his book “The Facebook Effect.”

“Yeah we tried to acquire Facebook” Lanman responded to Le Web founder Le Meur, Facebook had a lot of similarities to Microsoft back in the day.”

Kirkpatrick quotes Steve Ballmer offering Zuckerberg $15 billion, also alluded to by Meur onstage. Microsoft ended up investing $240 million at that valuation instead because Facebook would not sell. While onstage, Lanman speculated that Facebook’s valuation could one day be as high as Microsoft’s.

Microsoft and Facebook currently work together in a search partnership where Bing users can view information about their friends’ Likes. Facebook’s new messaging service also has deep Microsoft Docs integration.

Full anecdote from the Kirkpatrick book below:

“Microsoft CEO Steve Ballmer had flown to Palo Alto to visit his young counterpart twice. As Zuckerberg is wont to do, he took Ballmer on a long walk. Zuckerberg told Ballmer that Facebook was raising money at a $15 billion valuation. But Ballmer had come with something more sweeping in mind. “Why don’t we just buy you for $15 billion?” he replied, according to a very knowledgeable source. Zuckerberg was unmoved even by this offer. “I don’t want to sell the company unless I can keep control,” said Zuckerberg, as he always did in such situations.

Ballmer took this reply as a sort of challenge. He went back to Microsoft’s headquarters and concocted a plan intended to acquire Facebook in stages over a period of years to enable Zuckerberg to keep calling the shots. But Zuckerberg rejected all the overtures. What Ballmer finally agreed to instead was an advertising deal that included a provision for Microsoft to pay a huge amount, $240 million, for a sliver of Facebook, 1.6%. Microsoft’s investment gave Facebook an implied value of $15 billion.”