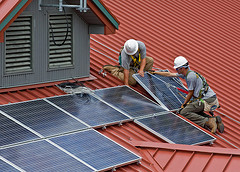 The company boasted about the number, and several news outlets touted the results. Does it mean the performance gap between thin-film and crystalline solar modules is closing? Could thin-film take a bite out of the market for crystalline panels in the U.S., soon? 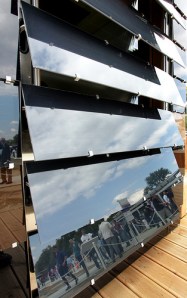 A senior analyst with Lux Research, Ted Sullivan, points out that there are a variety of thin-film solar cells in production today: MiaSolé uses copper indium gallium diselenide (CIGS) solar cells in their product; FirstSolar uses cadmium telluride (CdTe) cells, which are dominant sellers in the U.S. thin-film solar market today; while Konica and Sharp use silicon cells.

“There’s kind of a consistency issue for all [thin-film] players. Ideally, you want modules to be produced identically, so there is no variation between each module [especially once they’re installed out in the field].

CIGS thin-film solar production is the most highly variable as it involves four metal alloys and processes where impurities and other things can have a negative impact on the resulting product.”

MiaSolé’s 15.7 percent rating, he noted, is important because it illustrates that CIGS thin-film solar technology is comparable to the current, low-end potential energy of silicon polycrystalline panels.

But thin-film solar manufacturers have to procure a greater variety of metals from sources far from the United States (mostly China today) leading to market concerns over trade war potential, a shortage of metals, and unfair labor and damaging environmental practices of mines.

Meanwhile, crystalline module prices are coming down a bit as production ramps worldwide. A solar engineer at GridPoint in Houston, Texas, John Gardner says both technologies have their uses, even in a world where they cost about the same.

GridPoint sells and installs software, hardware and services to help organizations switch to clean energy in any form that will work best for their facilities and operations. Gardner says the company uses both thin-film and crystalline solar for client projects, but more crystalline so far, including in power generating systems they’ve installed for federal agencies, retailers and restaurant chains.

Gardner outlined some of the best uses and limitations of each technology:

“In a typical home installation, you’ll have a certain area, or amount of roof space where you want to place solar panels. If there’s a limited space, you’ll probably want crystalline to get the most power per square foot.

Structure or aesthetics sometimes dictate what you are able to install, though. We worked on one project involving a roof that could not handle the weight of crystalline panels.

Or let’s say you’re building a skyscraper with a glass façade. If you integrate thin-film type solar panels there, your building is now generating power with the same skin that was otherwise just glass.

If you have near unlimited space, say to build a solar farm out in the desert, you could consider thin-film because the modules cost less per watt. That said, labor costs to install a higher number of modules could offset the price difference, and crystalline might make more sense.”

On Monday, the world’s largest manufacturer of solar panels— SunTech Power Holdings Co. in Wuxi, China— announced it expects to have crystalline modules that have 22 percent conversion efficiency out in the market in the next three years.

That’s one more reason, Sullivan suggests, crystalline panels will remain dominant in 2011, especially in applications where space is limited. “Most of the thin-film technologies out there today will never get to silicon crystalline efficiency, which has just been around longer and is still seeing improvements,” he concluded.