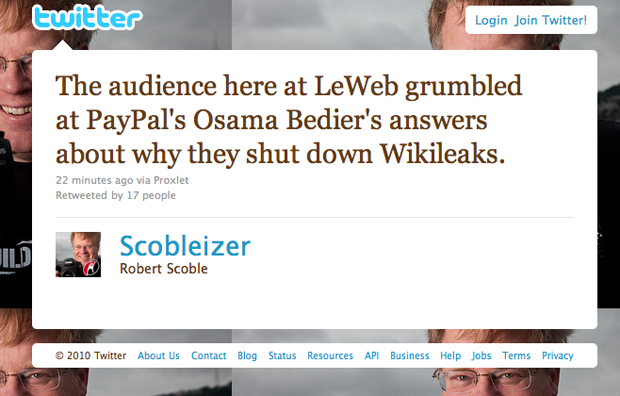 Milo Yannopoulos’ very first question on stage to PayPal’s VP of Platform Osama Bedier was about why PayPal blocked WikiLeaks payments and froze its account. The question was met with boos from the mostly European audience.

In his answer Bedier made it seem like PayPal had complied with a governmental request to deny service to WikiLeaks, “We have an acceptable use policy and their job is make sure that our customers are protected, making sure that we comply with regulations around the world and making sure that we protect our brand.”

Bedier also said that PayPal’s decision was influenced by the fact that the State Department deemed WikiLeaks illegal in a letter sent on November 27th, a statement that was not followed up on by Yiannopoulos. It is still unclear what exact US laws WikiLeaks is breaking.

When asked about Mastercard.com going down earlier today and whether or not Paypal had fears of retaliation, “One of the signs that you’re a successful payments company is that hackers start to target you, this case isn’t anything different.”

WASHINGTON (Reuters) – Text of a letter from the State Department to Julian Assange, the founder of whistleblowing website WikiLeaks, and his lawyer Jennifer Robinson concerning its intended publication of classified State Department documents. The letter, dated November 27, was released by the department.

I am writing in response to your 26 November 2010 letter to U.S. Ambassador Louis B. Susman regarding your intention to again publish on your WikiLeaks site what you claim to be classified U.S. Government documents.

As you know, if any of the materials you intend to publish were provided by any government officials, or any intermediary without proper authorization, they were provided in violation of U.S. law and without regard for the grave consequences of this action. As long as WikiLeaks holds such material, the violation of the law is ongoing.

It is our understanding from conversations with representatives from The New York Times, The Guardian and Der Spiegel, that WikiLeaks also has provided approximately 250,000 documents to each of them for publication, furthering the illegal dissemination of classified documents.

Publication of documents of this nature at a minimum would:

* Place at risk the lives of countless innocent individuals — from journalists to human rights activists and bloggers to soldiers to individuals providing information to further peace and security;

* Place at risk on-going military operations, including operations to stop terrorists, traffickers in human beings and illicit arms, violent criminal enterprises and other actors that threaten global security; and,

In your letter, you say you want — consistent with your goal of “maximum disclosure” — information regarding individuals who may be “at significant risk of harm” because of your actions.

Despite your stated desire to protect those lives, you have done the opposite and endangered the lives of countless individuals. You have undermined your stated objective by disseminating this material widely, without redaction, and without regard to the security and sanctity of the lives your actions endanger. We will not engage in a negotiation regarding the further release or dissemination of illegally obtained U.S. Government classified materials. If you are genuinely interested in seeking to stop the damage from your actions, you should: 1) ensure WikiLeaks ceases publishing any and all such materials; 2) ensure WikiLeaks returns any and all classified U.S. Government material in its possession; and 3) remove and destroy all records of this material from WikiLeaks’ databases.

(The letter is signed by Harold Hongju Koh, legal adviser to the State Department)