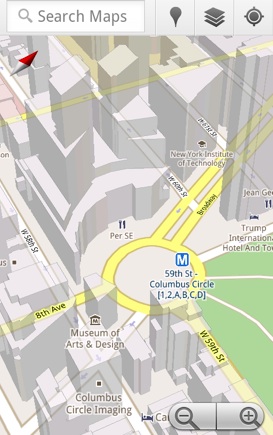 The Google Map App on Android phones will soon get a major upgrade which will allow it to render map images a lot faster, incorporate 3D buildings, offer offline caching, and use the compass to orient the map. In a talk this evening at the D Mobile conference, Android chief Andy Rubin gave a sneak peak of the new app.

At the heart of the new app is a dynamic map rendering engine which draws maps as you use them, and offers smoother transitions when zooming in and out of different levels. The dynamic rendering will also make it possible to start to show 3D buildings as you zoom into the street-level view. The touch screen will allow you to tilt and rotate the map and buildings.

The new maps load faster because they require 100 times less data each. Instead of downloading the entire map image for each level, the app downloads meta data which describes the entire map at all different levels and then renders the appropriate sector on the fly. This will start to give Google Maps offline capabilities on mobile phones. It may be possible to cache a map of an entire city on the phone. And for people who use the turn-by-turn navigation in Google Maps, when the new app comes out it will be able to recalculate the route even without a data connection.

The Google Maps app will also use the built-in compass on Android phones to automatically flip the orientation of the map to the person holding the phone. That orientation feature will come in handy when you are coming out of a subway station in an unfamiliar stop, or exiting a building. 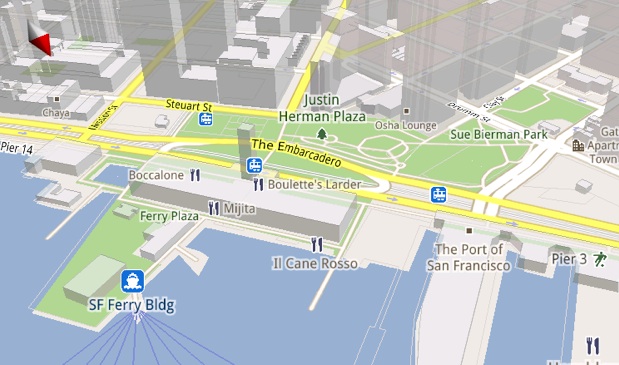