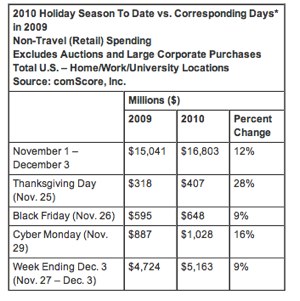 comScore just released its weekly data regarding U.S. online spending for the first 33 days of the November and December holiday season and the numbers are still strong following record breaking Cyber Monday and Black Friday sales. To date, consumers have spent $16.8 billion online, a 12 percent increase from the same period last year.

comScore says that larger retailers are doing particularly well this season, with the growth in spending for the holiday season remaining primarily from the top 25 online retailers. These e-retailers have seen seen their total dollar sales grow 20 percent while small and mid-sized retailers’ sales have been flat. The top 25 retailers have gained 4.2 points of market share to a level of 67.8 percent since the 2009 holiday season. 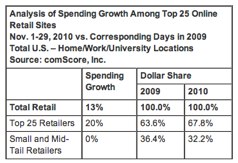 The company also held a survey amongst consumers on the importance of social media in purchasing decisions. When 500 internet users were asked how much they agreed with the statement “Recommendations from friends on social media sites are a great way to get gift ideas during the holiday season,” 33 percent agreed with the statement compared to 24 percent who disagreed (while 43 percent remained neutral).

While social media is definitely gaining ground as a place for product recommendations, the market is still young and has much more room to grow.

Of course, the rise in spending this year during the holidays isn’t all that surprising considering the slightly better conditions in the economy. And as more and more consumers look online for deals (as opposed to in brick and mortar stores), e-retail sales have risen as well. comScore predicted that total online spending for the season would increase 11 percent to $32.4 billion this year, so we still have $16 billion to go.