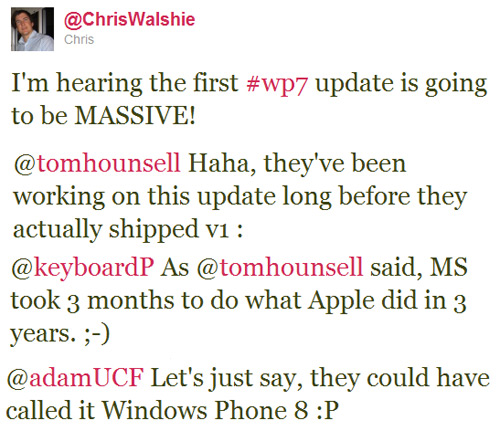 Windows Phone 7 users should circle the entire month of January on their calendar. Word on the street is that an update, to be released that month, will be “MASSIVE.” Yes, we’re talking all caps massive. So massive that it warps space-time itself. So massive that not even liposuction can save it. So massive that it makes Barcelona’s destruction of Real Madrid yesterday look like a minor blip in Mourinho’s career and not a bofetón. Massive!

Now that we’ve established the importance of this update, what can we expect?

Well, one of the WP7 developers said that Microsoft has done in three months what Apple had done in three years. (Incidentally, Florentino Pérez, president of Real Madrid, said the same thing when he took over the presidency of the club in June, 2009.)

That’s not all the update is expected to bring, of course, and that Microsoft might as well call it “Windows Phone 8.”

Supposedly there will be screenshots of some of the new features released later today.