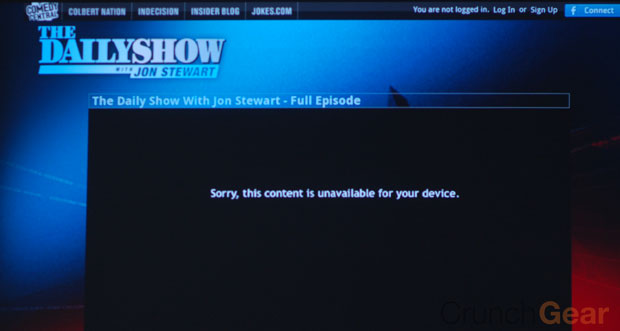 Sigh. This is getting a bit much. Turns out there isn’t much to watch on Google TV after all. Google TV is apparently viewed by big media as the devil, as the horned one himself and the only way to counter its/his takeover plans, is to disallow access/worship. And so, just like that, Viacom joined the ranks of News Corp, NBC Universal, Disney, and CBS in their stance of blocking the evil Google TV units access to its online content. This leaves Time Warner and its subsidiary Turner Broadcasting System as the lone media company still playing nicely with Google TV.

So where does this leave Google TV? Sony and Logitech are heavily promoting their wares rocking the platform and there’s a rumor circling that Samsung is about to announce a Google TV-powered HDTV. But without access to these online sources, the platform is nothing more than a glorified Netflix and Amazon streamer — and an expensive one at that.

Google TV’s concept is novel in that it sits between a provider’s set-top box and the HDTV. This counters the “another box syndrome” in that owners can throw the cable box remote in the junk drawer and use the Google TV one for all the functions instead. But its feature set is gimped right now. Sure, the robust search function finds just about every TV show ever made and presents the results in a clean format, but it’s nearly useless.

Only Time Warner content can be had for free. Everything else is through the subscription-based Netflix or pay-per-view Amazon Video On Demand. Hulu Plus is coming, but its sparse offering doesn’t compensate for the cost. If you’re just going to use these services, why not buy a Roku now or Boxee Box when it gains 1080p/5.1 Netflix instead? (or just stick with cable TV)

The GTV blockage somewhat hints at the platforms early install base. A few of the media conglomerates shut off their stream immediately, but Viacom seemingly took its time. Perhaps it was waiting to see how much content was actually accessed via the system. What ever the case, it blocked access saying that big media is running scared of Google and its little hobby, Google TV.

As a consumer, Google TV feels like the future, but a future that’s unattainable and unrealistic. A future where big media plays nicely with outside entities and where the consumer’s best interest is paramount. A future where Rupert Murdoch and George Soros play shuffleboard together after church every Sunday. Sigh.