Everybody loves free stuff. And, believe it or not, plenty of businesses love giving it away — freebies can help raise awareness of a company and increase customer loyalty. Thing is, it isn’t always so easy for a business to give something away — at least, not in a manner that’s going to result in much exposure. Listia, the startup that specializes in helping connect users with free stuff, wants to help.  Today, the company is launching a new ‘raffle’ feature that will allow businesses to sign up, decide what they want to give away, and use Listia to actually run the contest.

But why would a business pay for this? After all, throwing up a landing page with an email submission form isn’t terribly difficult. Listia has a few reasons: first, their contest pages include integration with Facebook and Twitter, making it easy for users to tell their friends about a raffle. And Listia is prominently featuring business give-aways throughout the rest of the site, which means businesses will have an audience of thousands right off the bat.

We should note that these raffles differ from Listia’s auctions, which are the startup’s main feature. Listia auctions invite people to use free points to bid on items other users are giving away for free. You can earn these points by interacting on the site (and giving away free stuff of your own), or you can buy some points yourself. The system ensures that the person who gets the item being given away actually wants it, and isn’t just shrugging their shoulders and saying “sure, why not”.

Listia’s raffle feature — the one that’s launching today — doesn’t have this mechanic: you enter your name and email address and a winner is chosen at random. But it does still benefit from the existing system: users are incentivized to share a business’s raffle on Twitter and Facebook, because they earn Listia points when they do so (which they can in turn use on auctions).

Listia is offering the raffle feature free for now, with plans to charge businesses for it down the road. Listia will be benefitting in another way: anyone who wants to enter a raffle has to create a Listia account (which is easy to do, but it’s still valuable for the startup).

Listia says it now has over 200,000 registered users (though they won’t say how many are currently active). The site recently had its 1 millionth auction, and has been growing 15-20% per month.

You can see the first Listia raffle, which is being offered by fellow YC-alum WePay right here. 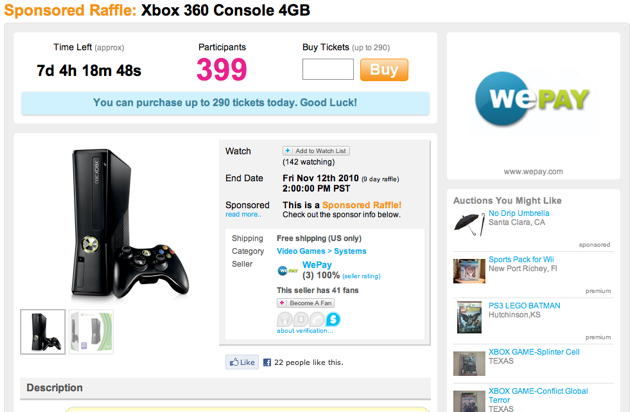