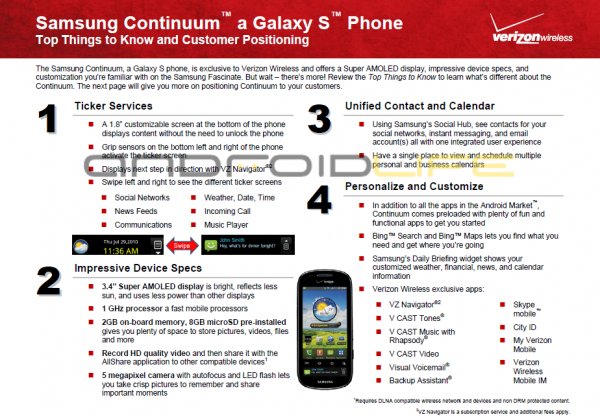 While it may be considered a novelty by some, the secondary display on the Samsung Continuum has me all a flutter. Of course, it all depends on how well Sammy can pull it off, but the idea of a ticker-style display just… turns me on.

So I’m, happy to report today that a “Top things to know” page has leaked from Verizon, listing — you guessed it — the top things you may want to know about the handset.

Now, we knew that this phone was based off of a Galaxy S, so it rocks the same 1GHz processor, and 5MP camera with “HD” video, but we weren’t sure on the exact screen size/resolution, nor the on-board storage.

Well, the Super-AMOLED screen sports the same 800×480 resolution, but comes in at 0.6″ smaller, measuring 3.4″. This, of course, should actually increase the perceived quality of the screen without lowering the real estate, so I’d happily trade 0.6″ of screen size for that handy-dandy secondary display.

The screen isn’t the only thing that’s been reduced, though, as the on-board storage has taken a cut from the 8GB/16GB on the original Galaxy S, down to just 2GB. However, it will come bundled with an 8GB MicroSD card, so you can’t really complain.

This wonderful beast of a thing is expected to be released on November 11, for an as-yet unknown price (I’m expecting $200 + 2 years, but you can never be 100% sure what they’ll ask).

More details as they arise…