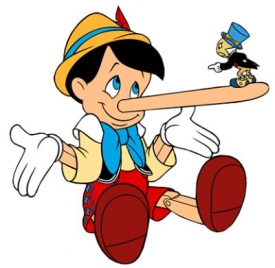 A UK insurance company called Direct Line asked an agency called Opinium Research to carry out a study on dishonesty on social networking sites for its latest ‘Straight Talking Report’.

The research firm polled just over 2,000 British adults on the Web from 3rd -7th June 2010, and discovered a shocking truth: that people are not always honest when they’re able to hide behind a screen name and an avatar rather than talk face-to-face.

Take a minute to calm down, breathe in and out, and continue as soon as you’re ready.

The ‘Straight Talking Report’ found that people are more likely to be dishonest when talking on social networking sites such as Twitter, than they would be when talking to someone in meat space. According to the research, just one in five people (20%) profess to being more truthful on Twitter or text, compared to a third (31%) who state that they are more frank when speaking to someone in real life.

Furthermore, men are said to be less likely to be honest via text messages than women (17% of men compared to 21% of women). Or women are more likely to lie when polled, of course.

Another nugget: women are less likely to be truthful in person than men, with 12% more men claiming to be honest face-to-face than women.

I warned you it would be a shocker.

I’ll leave you with psychologist Glenn Wilson, who delivered the obligatory quote meant to add some pseudo-scientific credibility to the mix:

“Modern technologies, such as smartphones, social networking and instant messaging have been hailed as innovations in the way people interact, removing obstacles to conversation and allowing for openness of discourse.

However, we sometimes use these means of communication rather than a face-to-face encounter or a full conversation when we want to be untruthful, as it is easier to fib to someone when we don’t have to deal with their reactions or control our own body language.”

An astute observation indeed – and I’m not even lying.