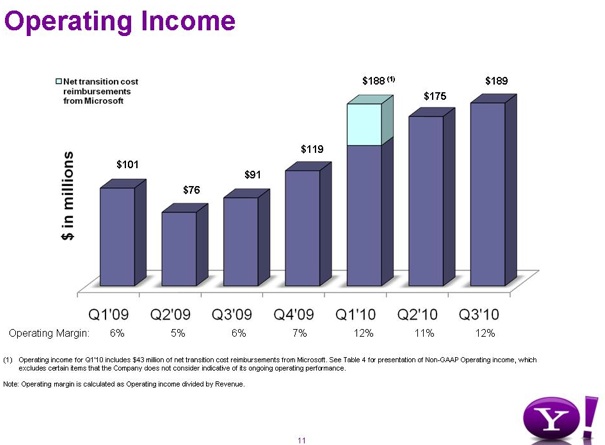 Yahoo is still trying to figure out how to reignite revenue growth, but its was able to show a nice pop in profits during the third quarter.. Revenues were pretty much flat, growing only 2 percent to $1.6 billion. Operating profits, however, more than doubled to $189 million (full slides below). Yahoo reported earnings per share of $0.29, well above the $0.15 consensus estimate. Nearly half of those earnings, or $0.13 a share, was due to the one-time sale of HotJobs during the quarter (which resulted in an $186 million gain in the quarter). Backing out the HotJobs gain, and a smaller but corresponding gain a year ago related to the sale of some Alibaba assets, EPS still would have grown 86 percent. Operating margins doubled to 12 percent.

Looking at how revenues break down, the strongest area was in display advertising on Yahoo-owned sites, which grew 17 percent to $465 million. That growth was offset by a 7 percent decline in search advertising revenues on Yahoo-owned sites to $331 million. Microsoft paid Yahoo $81 million in “search operating cost reimbursements” related to the cost of the transition of search over to Microsoft, and roughly equal to the savings Yahoo should see once that transition is over.

Yahoo is pouring more resources into improving its display advertising revenues, revamping its advertising and content systems. CEO Carol Bartz noted that as of yesterday Yahoo News switched over to a new unified code base, replacing 9 previous systems worldwide. The new back-end system should make it easier to experiment with new features and ad units and to iterate more quickly.

Bartz also revealed that so far this year, Yahoo has bought back 7 percent of its own shares. As investors flee the stock, Yahoo may have to continue to repurchase shares to keep the stock afloat, unless some of these initiatives begin to drive overall revenue growth. Bartz kept repeating the mantra “local, mobile, social, and video,” suggesting that she hopes that is where Yahoo’s advertising growth will come from in the future.

Asked to comment on the private equity buyout rumors, Bartz was surprisingly tight-lipped: “As tempting as it is to tell you what I really think, I cannot comment on rumors about hypothetical this or hypothetical that. We like our strategy, we like our progress, that is what I am focused on.” Also, she managed to make it throughout the entire conference call without swearing. 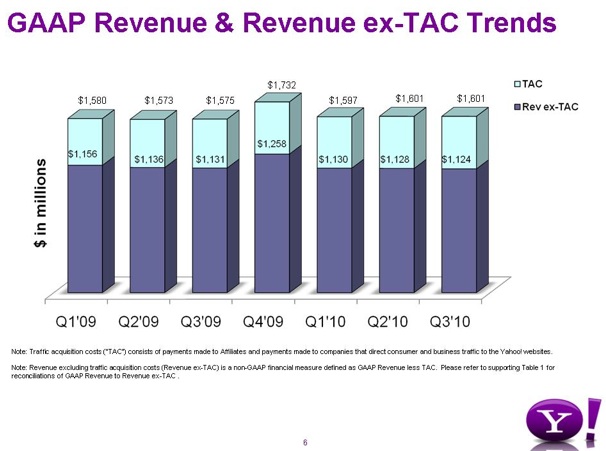