Causes, the startup that helps users leverage Facebook and other social sites to raise money for charity, has closed a $9 million Series C funding round led by NEA with participation from Founders Fund, Marc Benioff, Dustin Moskovitz, Ron Conway, Keith Rabois, and Karl Jacob. Scott Sandell of NEA will join as an observer on the Causes board. Causes CEO Joe Green says that the company will be using the money to build out its team, including some senior hires (the company is currently seventeen people). Causes will also be moving from Berkeley, CA to San Francisco.

As we’ve recently reported, Causes is transitioning from living primarily as a Facebook canvas application to running off of its standalone website Causes.com, with social connectivity through Facebook Connect. This change, along with some other optimizations, led to a two-fold increase in the amount of money the site raises in donations from its ‘Birthday Wish’ feature on a daily basis — $20,000 a day, up from $10,000 two months ago. It raises money though other channels, too, taking in a total of around $40,000 in donations a day.

The company has also recently landed a deal that will put Causes gift cards in every Safeway and Vons location in California. After buying one of these gift cards, users can sign onto Causes.com and donate it toward the charity/cause of their choice.  Causes earns revenue (it’s a for-profit company) by asking users for tips between 10-20%. Green wouldn’t disclose revenue figures, but says that Causes has 119 million installs on Facebook and has 25 million monthly active users.

Causes has now raised over $16 million, including a previously unannounced $5 million Series B round led by Case Foundation and philanthropist Ray Chambers’s MCJ Foundation, with participation from Founders Fund. That round closed in March 2008. 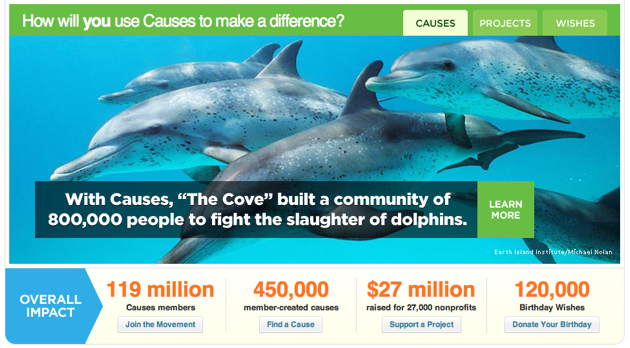