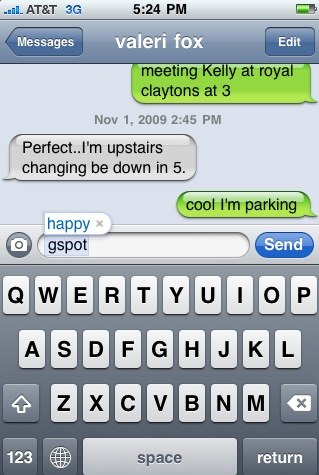 Today the US Patent and Trademark Office approved a patent Apple filed in 2008, which, get this, prevents users from sending or receiving “objectionable” text messages.  The patent’s official title? “Text-based communication control for personal communication device” which actually doesn’t use the pretty ridiculous noun/verb “Sexting,” but come on, we all know what they mean.

The “Sexting” patent background info states that the problem it solves is that there is currently “No way to monitor and control text communications to make them user appropriate. For example, users such as children may send or receive messages (intentionally or not) with parentally objectionable language.”

And the patent itself:

Ladies and gentlemen this means that Jobs and company have just sealed the deal on a solution to the number one fear of parents across America, kids sending “unauthorized texts.” As it looks like whatever algorithm or control the system is comprised of will basically censor the transmission of R-rated content on iPhones, is this the first sign of the end of “Sexting” as we know it?

Yes and no, as those interesting in “Sexting” will probably find some clever workaround to express how much they want to bang, screw, hit it or a myriad of other words that don’t immediately set off the censorship sensors.

On a positive note, it looks like whatever it is preventing kids from sending salacious texts will also help them learn languages, just not the perverted words.