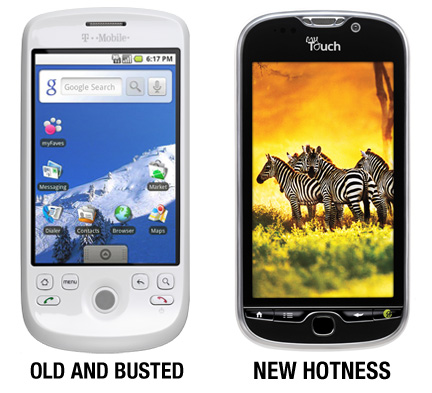 Just a few weeks after the announcement of their first HSPA+ phone, the G2, T-Mobile has just announced their second: the myTouch by HTC.

“But wait,” you say, “hasn’t the myTouch existed forever?”

Yes, yes it has. But that was the myTouch 3G — this one’s just the “myTouch”. Hurray for confusing names!

Besides the big ol’ spec refresh, the new myTouch also brings a pretty hefty facelift — if you look a bit closer, you’ll notice that this guy’s pretty much identical to the myTouch Slide, minus the keyboard. On the software end of things, it’ll come preloaded with Qik, Swype, Rock Band, Asphalt 5, and Monopoly.

T-Mobile really ought to have tacked something on to the end of “myTouch” here. As is, it’s like they’re trying to confuse the hell out of everyone. Original rumors pegged this thing as the “myTouch HD”, which really would have worked pretty well.