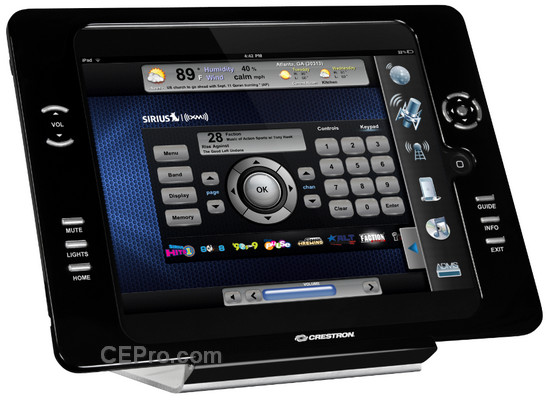 The iPad is making a big dent in the home automation field just like I thought it would mainly because it offers so many more advantages over the traditional remotes found in the space for a fraction of the price. $500 home automation remotes tend look like your Comcast DVR remote and so the iPad is quickly crashing that market. So much so that instead of work against it, most home automation companies developed apps, docks, and entire ecosystems around the iPad. Crestron’s latest accessory, however, address what’s unfortunately viewed as one of the iPad’s key disadvantages when used as a home automation controller: the lack of hard buttons.

100% touchscreen remotes tend to be a nightmare mostly because the UIs tend to look like something out of a bad sci-fi movie. (that’s a bad thing) They’re so bad that dedicated hard buttons are often built-in to make up for their shortcomings. Remember watching The Osbornes. Yeah, Ozzy isn’t that big of a dope head — the controllers just suck that bad. I guess it could be both, really.

Crestron’s iPanel was then developed for the iPad to help compensate for their software, which is not actually horrible for a change. The iPad slips into it and then takes over the duty of volume control, navigation, and a few other functions with buttons found on either side of the screen. Cop-out for developing a killer user interface? Sure, it is. But according to CEPro, the target price is $500 so clearly the goal here is revenue and not providing the best user experience anyway.