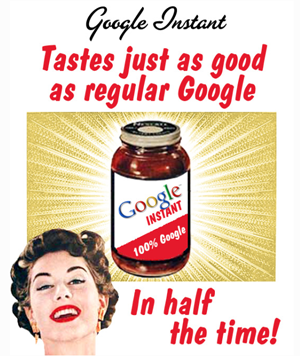 Google made it clear at its press event today that Google Instant will not change way that company will rank ads or show ads. From the Google blog:

“We recommend monitoring your ads’ performance the same way you usually do. Google Instant might increase or decrease your overall impression levels. However, Google Instant can improve the quality of your clicks since it helps people search using terms that more directly connect them with the answers they need. Therefore, your overall campaign performance could improve.”

At the event, Google Ad Evangelist Frederick Vallaeys went into detail with us why the new feature might in fact improve Adwords campaign performance, and also debunked some of the easily made assumptions, which he outlined:

* Google Instant will greatly increase ad impressions: Impressions will go up, because of the new “3 seconds counts as an impression” rule as well as the rule that any page engagement also counts. But, from an advertiser perspective, that “20 times as many searches” statistic tossed around today is going to be more conservative.

* Increased impressions means increased costs: Most Adwords campaigns are cost per click, advertisers are not paying for impressions.

“Because of the interactivity the feed, people will actually get close to the results that they want to see and are more likely to covert to becoming a buy.”

Google is banking on Google Instant users “learning how to search better,” or getting closer to the thing they were searching for, in essence optimizing the ad. “When the advertiser gets a click and they’re still paying the same amount for that click, they’re actually much more likely to get a sale from that,” says Vallaeys. The behavioral theory here is that normal non-instantly updating search is kind of hit or miss, and the more Google can serve up exactly what you want, the more you’ll actually want it or put your money where your mouth is and buy it.

Will the 350 million hours of user time per year saved negatively affect advertisers? According to Vallaeys, No. “We’re the only company in the world whose goal it is to get users off our site as quickly as possible. And ultimately we do monetize for a when a person finds the ad they were looking for and clicks off of it.”

But this doesn’t necessarily mean less searches, says Vallaeys, “What I think will happen is that users will be taught how to search better,  and do more searches if they’re finding that the searches actually work and they get results. That usually means that more search is happening. And usually that means more opportunity for advertisers to connect to users.”

Not surprisingly, Vallaeys refused to speculate when asked for an estimate of how much revenue this improved Adwords campaign performance could mean to Google. My guess: A lot.