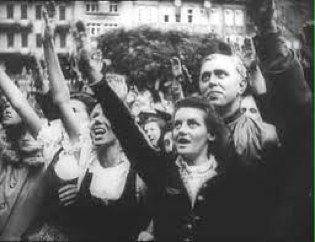 If I ever write another book it will probably be about one of three topics. The first is the truth about how the press and journalism really works – the sausage making – to show just how much of a beautiful, subjective and chaotic mess it all is. The second idea is to talk about how perfect blogging is, with its constant feedback loop, as a training ground for mass psychology and manipulation. The third idea I’m keeping to myself for now, but it’s more startup focused.

It’s the second one that’s been on my mind lately. Mostly because it’s become pretty clear to me that any blogger worth her salt could start, say, an extremely successful militant religious cult.

Any blogger will tell you how frustrating the early days are. Getting someone, anyone, to link to you. Your first comment! etc. And as your audience grows you are introduced to the first rule of anonymous human behavior – it’s dark and brutal, and reminds me how thin the veil of civilized behavior really is. If there is something nasty that can be said, someone will say it. Over and over.

A big part of blogging is simply keeping the peace. You set rules on whether or not you’ll allow anonymous commenting, or commenting at all. You decide if/how to moderate comments. You decide if/how to respond to opposing arguments and (more often) personal attacks. And you, involuntarily for the most part, evolve your writing in response to the feedback loop. Those are the days of innocence, simple joys and simple sadnesses.

But then you start to get really good at what you do. You write something and you get trashed. The next time you try it a little differently and it the commenters love you. You don’t even do it consciously – but over the years you just get better at it. To the point where you pretty much know exactly what the reaction will be to any given post, and how to tweak things to get the reaction you want.

Zynga talks about constant A/B testing in its games to maximize revenue, a huge competitive advantage for them. Bloggers go through the same thing every time they write a post.

Old media types don’t have quite the same experience because they generally have an editorial agenda, certain writing rules, and editors to please. There are too many layers between them and the direct feedback loop. so they evolve much more slowly. Bloggers have a direct line to the collective mind.

I imagine priests and rabbis and career politicians have much the same experience. Speaking publicly so frequently they learn exactly how to manipulate the audience, or the camera, to get the reaction they want. It doesn’t work on every individual, but the masses as a group are easy to manipulate. and your audience tends to self reinforce over time, meaning the people who buy what you’re selling tend to come back for more, and others wander away.

In a post last weekend I wrote about women in tech. I feel like I’m on pretty firm ground here, since more than half of our senior staff are women, including our CEO, and we cover female entrepreneurs whenever we find them. I know exactly the post I could have written to get a super big high five from our audience. Talk big about how the problem is so prevalent, talk quietly about what we do directly to help solve it (but note how much more we must do!), and then salute the ringleaders who are making a living out of pretending to care about the issue (without, of course, pointing out that they are frauds). Seriously, I could have had you as a collective group eating out of my hand on that one. I even pointed to a couple of posts by men that did exactly that (also very experienced bloggers who know how to write a crowd pleaser when they need to).

I didn’t do that though. I wrote a different post that I intended to question some of the basic assumptions that are being made about women in technology. And I knew exactly what the comments would be like. More FU than high five, for example.

And that’s ok with me. I’d rather say what I really think than pander to the crowd. This is an issue that’s too important to use for my own popularity.

It would be so much better if we could stop a lot of the bullshit that we see in blogging. To do that we need a smarter audience – one that sees through it because they’ve been trained to, and demands a little more meat on the bone from the sites they frequent. I’m telling you flat out that any decent blogger can manipulate the hell out of their audience. Don’t let yourself be one of the manipulated.

In a follow up post I may explain some of the common tricks to manipulate the crowd so you can see through them more easily in the future. And just for the record, we try to avoid manipulating readers here at TechCrunch. Or at least to abuse that power as little as possible. And most of my favorite blogs also play it straight.

Remember this, though. When you’re reading something here that’s getting you really riled up, stop. It may be that you really should be thinking the exact opposite of what you are. And if you find yourself floating through a post agreeing with all the subtle pandering, wake up! And call us on it immediately.

And yes, I know exactly what you as a group are going to say in the comments below. If I told you it would change the outcome, of course. But I think you know deep down that I’m right.