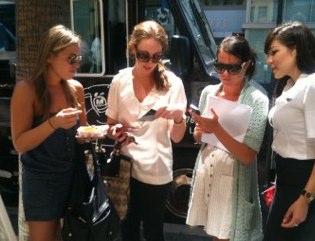 Sometimes the titles just write themselves. On Tuesday Virgin America and Loopt partnered to offer people two-for-one tickets to Cancun or Los Cabos from California. All you had to do was check in on Loopt at SFO, LAX or one of a variety of taco trucks in San Francisco and Los Angeles in a four hour window.

So how did it go? Loopt says 1,300 people checked in to a single taco truck in San Francisco, and 80% of those people have already bought tickets on Virgin America for flights. It was Virgin’s fifth highest revenue day ever, says Loopt (we’re confirming with Virgin).

Added Loopt CEO Sam Altman by email: “You should also mention that we are on fire.” And indeed they are. Loopt has more than four million users, despite the fact that they are covered far less often than the smaller Foursquare. Loopt is quietly becoming a very large presence in the mobile, um, presence war.