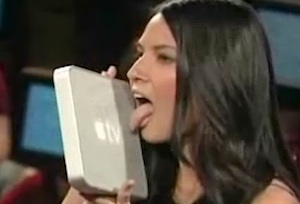 Many people noticed that Jobs’ “and one more thing …” intro today was reserved for Apple’s “hobby,” Apple TV. Jobs also referred to Apple’s TV venture as a “hobby” back at the D8 conference in June with significantly less tongue in cheek. In an interview with AllThingsDigital’s Kara Swisher, the Apple CEO implied that he had given up on it with the dismissive “smarter people than us will figure it out.”

A closer look at other Steve Jobs statements reveals that he tends to not mean what he says with regards to future product development, whether it be about Apple’s forays into mobile, the video iPod and his “tablets are for losers” doublespeak before launching the iPad.

Jobs’ “Smarter people than us will figure it out” is pretty far off from today’s “It’s going to be pretty cool.” Judging by the sheer amount of promotional materials alone it looks like Apple is ready to take Apple TV seriously, or at least trying to make the situation less of a nightmare.

And in case you actually want to know what Jobs means when he says stuff about Apple TV, here’s a particularly prescient TechCrunch post from June on why today’s Apple TV hockey puck might be a stepping stone towards greater aspirations:

“I can almost hear Jobs now: Apple Television: it’s the best television out there. But it’s also the best web surfing experience from your couch, the best app console in your living room, and the best connected media player in your house.”

Apparently MG can now hear Steve Jobs, FROM THE FUTURE.