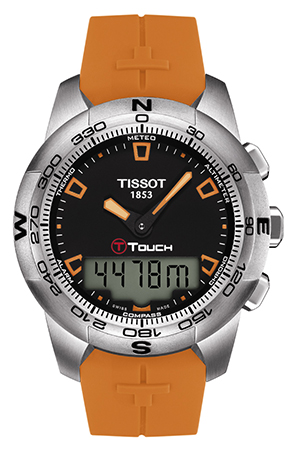 The Tissot T-Touch is Tissot’s flagship sports watch. While other models have come and gone, the venerated T-Touch with its touch-sensitive crystal and bold styling has remained constant. A few models appeared to replace the original, notably the T-Touch Expert, but nothing could quite unseat it.

Now, however, Tissot is essentially mothballing the old model and is focusing on the bold T-Touch II. This new model has a larger LCD screen, better water resistance, and more style options. But it’s still the T-Touch you know and love. But, and this is important, it has a backlight!

The T-Touch was one of the first wrist computers and it was unusually mostly because it came out of a Swiss house. To activate the functions you held down the button at 3 o’clock and then tapped the crystal at one of the points on the face. The functions included an altimeter, barometer, thermometer, and even a very unique compass that caused the hands to rotate, well, like a compass. It was the ultimate in cool to be able to activate the watch and have the hands spin around of their own accord. It was, for a time, fairly magical.

Now the T-Touch isn’t quite as magical but it’s still a cool piece of kit. The watch is quite thick and is about 47mm wide. The rubber strap is, in short, one of my favorite straps ever and the traditional orange goes well with almost nothing, which is why it’s so great. The orange strap, in short is a big thumb in the nose of fashion.

The backlight first appeared on the T-Touch Expert and adds quite a bit of value to this watch. The backlight has always been the biggest problem with the original model and this new light is a marked improvement.

The functions, barring a few additions, are the same in the T-Touch II as in the first model. You have extra time zones in this new model and you have some unique settings that allow you to set “climate zone” and hemisphere for more accurate altimeter readings. It is also a bit more water resistant with up to 100M resistance. It is obviously not a diving watch, however, simply because the sensors require access to the outside air to work.

The model I tested with rubber strap costs $825 at the official Tissot shop. This is the perfect geek’s watch and except for a few Casios I’ve grown to know and love it’s probably one of the best wrist computers I’ve worn. It’s fun, useful, and quite handsome and only a hopeless snob wouldn’t love the orange strap. It makes for a great Swiss quartz timepiece for almost anyone and, as evidenced by my wife wearing mine for most of the summer, is great for men and women.